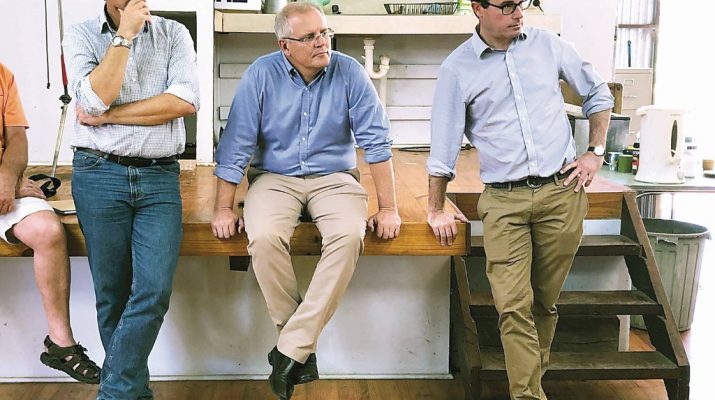 The Prime Minister said his government would invest in additional mental health services and short and longer term water infrastructure for the region in addition to the $1 million already locked in for each of the East Gippsland and Wellington councils to help with local projects to boost jobs and the economy.

“Help is on the way for Gippsland farmers and families,” Mr Morrison said.

“I can’t make it rain but we’re working closely with the local community to ensure the right supports are in place and that we have the water infrastructure needed for the future.

“I’ll also be meeting with the Victorian Premier [Daniel Andrews] … to discuss what else all three levels of government can do to cooperate and get Gippsland through this drought. Like the farmers, families and businesses trying to cope with the drought across other parts of the country, supporting Gippsland is a priority for my government.”

A spokeswoman for Mr Chester’s office said the federal funding represented about half the cost of phase two of the Macalister Irrigation District modernisation project. Phase one was jointly funded by the federal and state governments and Southern Rural Water.

Premier  Daniel Andrews told a media conference on Sunday, February 23 he “welcomes the Prime Minister’s investment and thank him for that” while Southern Rural Water managing director Cameron FitzGerald said he was “delighted” by the announcement.

Mr Chester said phase two of the modernisation project would focus on the Newry and Boisedale area.

This next stage of the project will complete the transformation of the Macalister Irrigation District’s ageing assets into a highly automated, efficient, modern water delivery system,” Mr Chester said.

“Phase two will save and reinvest up to 10 gigalitres of water back into the rural economy, secure the Newry and Stratford supply network … boost Gippsland’s output of milk and food and reduce nutrient discharges to local waterways.

“Importantly, phase two works would boost jobs during construction and create ongoing jobs as rural businesses expand. This is a significant long-term investment in Gippsland’s water infrastructure at a time when much of the region is in drought.”

Under the scheme, primary producers, property owners, share farmers and lease holders in a drought-affected area can apply for a rebate for new water infrastructure for grazing livestock and to improve drought resilience.

Eligible Expenses include buying and installing pipes, tanks, troughs and pumps. Twenty-five per cent of those expenses incurred since July 2018 can be claimed, or up to a maximum amount agreed by their state government.

“’I’ve Been meeting with farmers and agricultural industry representatives across Gippsland. They’ve been telling me that one of the major issues they are facing is access to on-farm water,” Mr Chester said.

“As the drought worsens, the implementation of this scheme is becoming increasingly urgent.”

“The drought is having a huge economic, social and environmental impact on our communities, some of which are enduring some of the driest conditions for a century,” he said.

“The federal government is now helping 380 farming families across Gippsland with fortnightly payments of up to $615 under the Farm Household Allowance.

“There are two special lump sum payments for recipients: one paid last September and the second this April of $12,000 for couples and $7200 for singles.”

“Having spent time on the ground with drought-affected farmers earlier this month, we understand the importance of immediate and meaningful assistance for Gippsland’s farming families,” Mr McCormack said.

“That’s why our government is putting in place immediate and long-term measures to provide relief for those people who are doing it tough.

“The up-to $31 million we’re putting on the table for the Macalister Irrigation District project as well as the On-Farm Emergency Water Infrastructure Rebate Scheme are about the short and longer term future of Gippsland farming.

“Throughout Australia it’s water projects like these that may sound small in the scheme of things but have huge positive potential.

“We also understand the impact on local business in times like these which is why our $25,000 Instant Asset Write-Off and accelerated depreciation measures for new water infrastructure and fencing are so important to help keep incomes flowing.”

Mr Chester said an extra $2.5 million for additional mental health services would be distributed through the Gippsland Primary Health Network.

“That funding will be available immediately so farmers will have someone to talk to and discuss their situation,” Mr Chester said.

Agriculture and Water Resources Minister David Littleproud said the centrepiece of the government drought response would be the $3.9 billion Future Drought Fund, which passed the House of Representatives last week and would provide a sustainable source of investment for climate adaptation, drought resilience, preparedness and recovery.

Additional support available from the Commonwealth government includes $3.6 million to expand Medicare Benefit Services to enable local doctors to offer mental wellbeing support services via telehealth to rural and remote patients, as well as $225,000 for ReachOUT to raise awareness of counselling services in drought-affected communities.

The federal government has also committed $30 million for selected charities to continue supporting farmers, farm workers and farm suppliers facing hardship arising from drought through cash payments and vouchers to be used to meet basic needs such as food, personal products and utility bills.