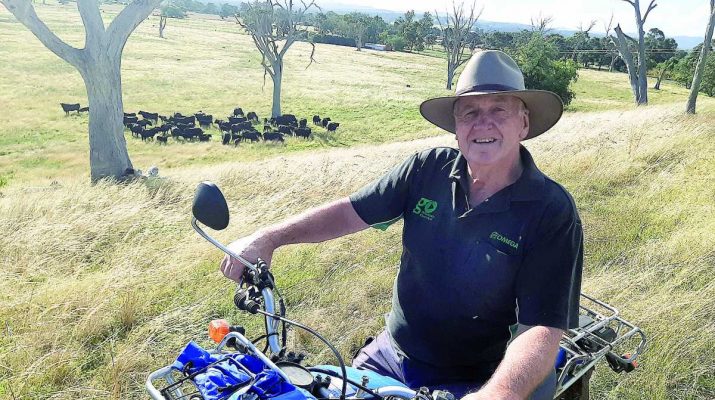 By LIZ BELL AND PETER HILL

Recent welcome rainfall across much of Gippsland, including Wellington Shire, has brought a renewed sense of hope to the region’s farmers, with some cautiously suggesting the drought may be beginning to break.
Stradbroke farmers say Merriman Creek is flowing better than it has for years, while at Warrigal Creek, Darriman, Elizabeth Balderstone said prospects for the season were good.
“We had an okay spring and summer and we have had close to three inches in the last week which sets us up for winter, and if we get a good spring we should have a good year,” she said.
Ms Balderstone said the creeks flowing out of the Mullungdung State Forest were yet to flow, meaning Jack Smith Lake was still dry. And while there is surface moisture for pasture, there is still a need of a heavy sustained fall to bring the forest and its swamps back to life.
“The last time Jack Smith’s Lake was filled was 2001, so that’s a long time dry,” she said.
At Stacey’s Bridge, the Billy Creek has overflowed onto lower pastures.
David McAninly said they had recorded rain during close to 20 weeks this year, with about 100 millimetres in 10 days.
“It just kept falling,” he said.
“That’s more than for the whole of last year.
“I’m thrilled for the local people recovering from drought – this is as good as anywhere in Victoria.”
Things are also looking good at Woodside Beach, with rain having fallen in January and February.
Ninety Mile Beach biodynamic farmer Steve Ronaldson said he had recorded about 65mm of rainfall at the end of March and into April.
However, he is tentative about declaring the drought broken, and his 50 acres of wetland adjoining Jack Smith Lake Reserve is still dry.
“There’s still a bit of room there after three years of dry,” he said.
Weather experts also warn the pain is far from over, despite the wet start to the year.
Bureau of Meteorology climatologist Simon Grainger has been keeping a close eye on local rainfalls, and said the April rains of between 50 to 100mm around Gippsland were “well above average”.
If that continued throughout May, he said the bureau might even stop drought monitoring for the short term. But he isn’t so optimistic for the longer term.
“In the shorter term, yes, rains over the nine months from August 2019 to April have helped ease conditions within Wellington Shire,” he said.
“But if we look at longer term rainfalls, say the 25 month period since April 2018, all of Gippsland still meets the criteria for meteorological drought.”
Nationally, April rainfall was below average for the country as a whole.
Mr Grainger said far East Gippsland was one of the worst hit areas, with little real relief in sight.
Victoria’s Rural Assistance Commissioner, Peter Tuohey, said parts of Gippsland would be in drought into the next year at least, unless there were significant winter and spring rains.
“It varies so much in Gippsland, it might be green in places, but I know of one farmer in East Gippsland who has 1000 acres but not a drop of water on it,” he said.
Even those who have had plenty of rain are not out of the woods.
Briagolong farmer Barry Noble said this year’s rain was not all it seemed, and was a blessing which came with a caveat.
“I was at the point of giving up – I had de-stocked and was resolved to having to buy one more truckload of feed – and then the rain came,” he said.
“Now, around Briagolong, we have full dams and there’s plenty of feed, and we have gone from no feed for our sheep, to too much feed and not enough sheep,” he said.
Barry, who like many farmers de-stocked during the dry times, said restocking and getting back on his feet would take years with stock prices so high.
“It’s really difficult to buy stock, not just because we are paying a lot more now, but because availability is down,” he said.
“There was a run on stock when the coronavirus started because of the demand for meat, and that worsened availability.
“We can’t buy animals back for what we were forced to sell them for, and even if we could, they are just not there.
“We may have great conditions now, but with no animals and the bills coming in it will be difficult for a while to come – I just got my farm insurance bill and I am too scared to open it.”
Son Stephen, who diversified late last year to start a wool-based clothing line, is faring better than some. He said the off-farm income had kept he and wife Alice afloat, allowing them to hold on their dream of a future in farming.
Up the road, Barry’s Briagolong neighbour Greg Dunsmuir couldn’t be happier with the new conditions, but said three years of drought had been too much for him.
After breeding cattle all his life, he’s down to 45 cows plus some heifers, from about 150.
“I’m almost 70 and with the prices the way they are now, I don’t think I’ll be restocking.
“The rain has just come too late.”

Demand down for golden fish