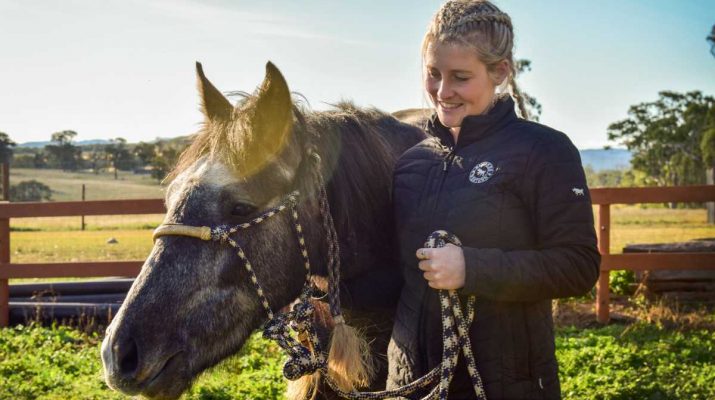 Bairnsdale horseman Lewis Benedetti grew up catching and training brumbies in the Victorian Alps and estimates he has caught more than 400 feral horses over the years.
Mr Benedetti regularly educates “nice horses caught out of the bush” and said “you can’t fault them” if they are trained the right way.
“I can find homes for them left, right and centre. They can be trained so easily, they are quiet and tough, you don’t need to rug them or shoe them, and they eat bugger-all,” he said.
The natural horseman has just educated a three-year-old gelding named Ollie caught from the Nunniong high plains.
Owner Amber Moyes plans to use him as an “all rounder”.
“He is cuddliest horse, he will make anyone smile,” Mr Benedetti said.
Mr Benedetti said he was “disappointed” when Parks Victoria announced it would go ahead with plans to cull the animals last month in a bid control their numbers.
He suggested the state government could instead contract professional horse trainers to educate brumbies to sell as riding horses, which would create employment in the regions.
“Their numbers do need to be controlled, but shooting them is not the right thing to do. The government kicked the cattlemen out of the high country and now there is no one around to control the brumbies,” he said.
“There are so many cowboys who would jump at the opportunity pick out the good ones and give them a second chance.”
Parks Victoria is planning to deploy small teams of ground-based professional shooters into high conservation areas with thermal imaging and noise suppressors to cull “free-ranging feral horses”.
ParksVic surveys showed that horse numbers across Australian alpine parks jumped from roughly 9000 to 24,000 in the past five years.
The agency stressed the operation would be under “strict animal welfare protocols” with “expert equine veterinary oversight”.
It also assured that longer-term trapping and rehoming programs would continue.
The issue had struck a raw nerve with animal lovers causing widespread outrage at the idea that the wild horses would be shot.
Brumby advocates are in the midst of a legal battle to stop the cull from going ahead after the Federal Court rejected a bid from the Australian Brumby Alliance to protect the horses.
The proposed cull had even garnered support from the RSPCA which said the operation should be carried out in conjunction with non-lethal control measures such as ex-closure fencing.
Parks Victoria chief executive Matthew Jackson said feral horse management was part of an integrated approach that also included managing deer, pigs and other non-native species.
Mr Jackson said the summer bushfires had wiped-out unique habitat for threatened species and what was remaining was being severely damaged or overgrazed by brumbies.
“Parks Victoria has a legal and moral obligation to protect the native species that are at risk of extinction from the impacts of feral horses and other pest animals,” Mr Jackson said.
“Native alpine plants and animals which are found nowhere else on the planet are not equipped to deal with the weight, grazing, hard hooves or trampling of feral horses.”
The Victoria National Parks Association said wild horses were trampling moss beds, ferns and high altitude wetlands and peatlands in the Alpine National Park.
VNPA advocate advocate Phil Ingamells said Parks Vic’s plan was “highly consultative, principled and evidence-based” and it “deserved the respect of the community”.
“Since the abolition of cattle grazing in the Alpine National Park, these wetlands have been slowly recovering, only to be impacted now by a growing number of feral horses,” Mr Ingamells said.
“It’s our job to hand these great natural areas on to future generations in good shape.”
Meanwhile, Ollie returned home from Mr Benedetti’s schooling back to his loving owner Amber Moyes who was keen to take him on when he was caught out of the bush as a foal.
“When he was first dropped off here he was so scared, but it only took me an hour with him and he was so trusting considering he came from the bush,” Ms Moyes said.
“Olly is so beautiful, brumbies are such kind natured animals, they don’t need to be culled, they can be homed. There are alternatives for them.”