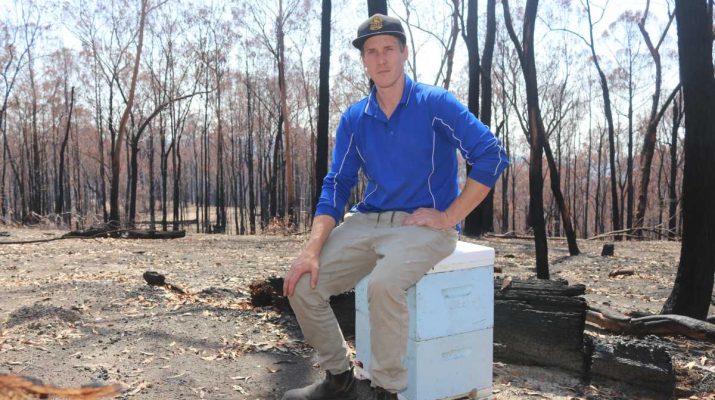 By MICHELLE SLATER
Bruthen beekeeper Ben Murphy purchased Tambo Valley Honey only 18 months before the New Year’s Eve bushfires destroyed about 200 hives.
Mr Murphy estimates it could take about a decade for the bush to recover its structural integrity and start producing enough flowers for the forest pollinators to do their job.
“We are only seeing the start of the impact from complete loss to damaged boxes, the biggest loss is yet to come,” he said.
“The immediate losses are the first thing, the excessive smoke and heat kills a lot of bees and if they do recover, it will take months.”
He said local beekeepers were “heavily dependent” on the bush around Bruthen due to the particular species of eucalypt and floral diversity.
He said honey lovers may not be able to enjoy some species unique to East Gippsland such as Mallacoota Bloodwood or roundleaf box which were taken out in the fires.
Mr Murphy runs 1200 hives, 450 of which were in fire-impacted areas.
He estimates there were about 45,000 bees in each hive.
He is now taking his hives to central Victoria and the Mallee to find the right types of floral resources to let them recover, or is borrowing licences from other beekeepers to help him through.
However, he said this means added expense and more time and the road away from his young family and moving into regions where he has little experience.
Mr Murphy purchased the business from third-generation beekeeper Ian Caine with licences through Bruthen, the Buchan Valley and Swifts Creek.
Mr Caine had been through bushfires before, but said the scale of these were “unprecedented” as he watched 200-metre high flames race over the ridge behind his property.
“Some forest systems will change as the scope of these fires are so large up the eastern seaboard, I have concerns about what the outcome will be on the total ecosystem,” he said.
Mr Caine remains hopeful the bush would recover in due time and was buoyed the appearance of ectopic growth in the charred landscape.
“Droughts always make it more difficult, but the drier for longer scenario and this fire on top is just another layer again,” he said.
“Excessive heat with droughts impacts species’ ability to flower and for longer and with consistency, many species are flowering in different timeframes then they were in my grandparents’ time.”