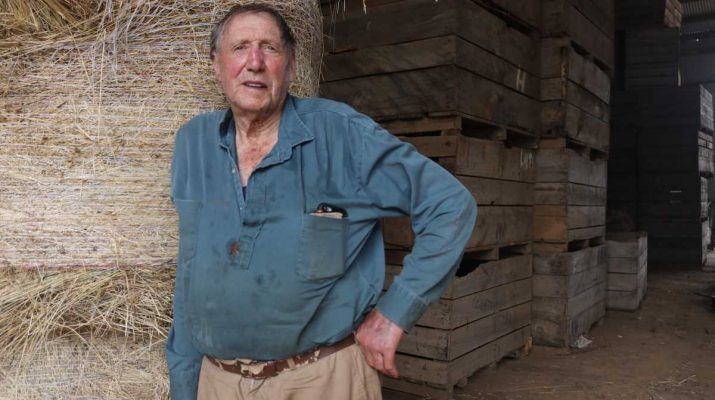 By MICHELLE SLATER
Thorpdale spud grower Les Horsfield talks passionately about potatoes and at the age of 90 is still not quite ready to put away his work boots after 70-odd years in the trade.
Mr Horsfield used to oversee 224 hectares of growing sebago and kennebec spud varieties on Horsfield Farms producing about 200 or 300 tonnes a year.
He told Gippsland Farmer he only stopped growing potatoes last year on a small plot of land but is still tending to 50-head of cattle on about 40 hectares.
These days, most of his farm being leased out for snow peas, spuds and grazing.
“I still work every day,” Mr Horsfield said.
Mr Horsfield moved to Thorpdale in the late 1940s and started out dairying and share farming with his cousin. He took over the farm a few years later and switched to spuds which was suited to growing in the region’s well-drained soils.
“The sebago variety are good spuds, and as far as the public is concerned it is still the best variety of chipping, baking, mashing and has a good flavour,” Mr Horsfield said.
“I eat potatoes with every main meal and I eat potato chips instead of biscuits and cake for my snacks.”
He said his best year was in 1956 when spuds ”reached
15 quid a bag” and in the peak years between 1960 and 2000, he was loading up 25 semi-trailers a day.
He said in the mid-1980s his farm was exporting 36 containers a week to the French territories of New Caledonia, Mauritius and Tahiti.
However, the export market slowed down when a parasitic golden nematode infected the crops.
“We supplied the French territories for 26 years straight. Their exact words were ‘we hadn’t had a satisfactory supplier since we left you’,” Mr Horsfield said.
Mr Horsfield said some of the biggest shake-ups to Thorpdale spud farming was automation and irrigation which he said “got going in the ’70s when the power came through”.
He said the farm “got really automatic” in 1970, when they began importing modern harvesting and grading machinery from Europe and United States.