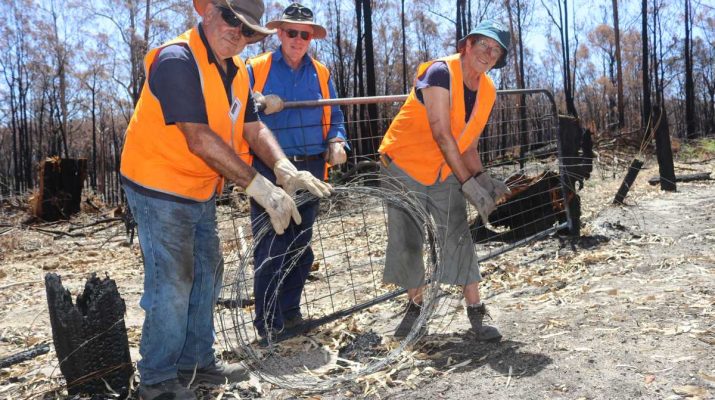 Rural charity Blaze Aid has been busily helping landowners around Bruthen secure their properties after bushfires razed the area, destroying family homes and farm assets.
About 60 volunteers had joined the Blaze Aid camp when it was set up at the Bruthen Recreation Reserve in mid-January, with more people joining by the day.
Bruthen camp coordinator Phil Fraser estimated the Bruthen job would last about four months, with plans to send crews to the Buchan Valley and Gelantipy, where steep country would pose added challenges.
He said volunteers had been removing burnt fencing wire, which he described as a “labourious job” ready to put up new boundary fences with material supplied by the property holder.
“The first priority is to keep everyone safe. Hazardous trees are a big problem on this job, we won’t go there until trees are assessed. Blokes in the bush say they can hear trees falling at night,” Mr Fraser said.
“I had to call the CFA to put out a tree still burning inside three weeks later. It’s unbelievable the amount of fencing materials we need, it’s incredible.”
Mr Fraser said a dump of rain in mid-January had greened up the region and washed out a lot of ash, something which boosted the morale of the Blaze Aid crews.
“Generally, the mood is positive, when we came here there was not a blade of green grass, the rain made a huge difference. Smoke is a hazard, but the rain dampened it and the smoke disappeared,” he said.
“We are working seven-days-a-week, apart from high fire risk days as there are still a lot of hot spots that could flare up.”
Mr Fraser said they had 86 farms registered on the books, ranging from smaller rural lifestyle blocks to 500 hectare farms, helping primary producers to “get back into business”.
He said a Maffra John Deere and Case IH dealer had donated a couple of tractors to use with a couple of post-drivers, and volunteers were also handing-out food hampers to impacted families.
Mr Fraser joined Blaze Aid to help rebuild fences in Terang after bushfires in 2018 and use his skills as an ex-dairy farmer.
He also helped out after last year’s Bunyip fires, but said the Bruthen job was logistically difficult with fires spread out across the region, making transporting staff and equipment more difficult.
“Volunteers love it when new fences are up, we see a smile on their faces,” he said.
“We are working with local contractors to put the posts in, then we help hang the wire.
“Contractors are booked years ahead.”