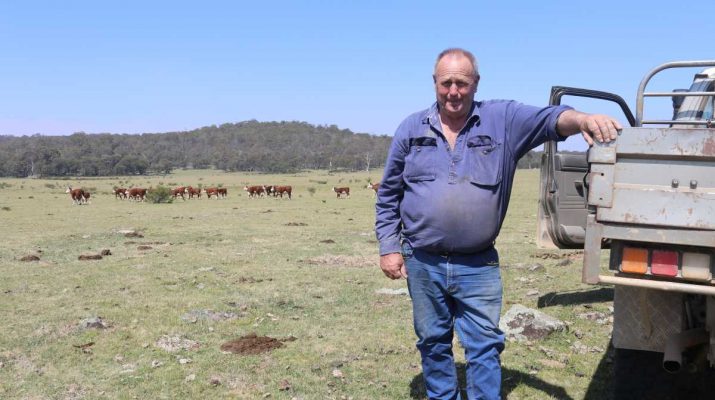 Ensay cattleman Phillip “Bluey” Commins knows every inch of the Nunniong Plains after his family have spent the past 150 years grazing their cattle in the Victorian high country.
Bluey said up until the 1960s, the Commins clan could send beasts into the mountains all year around, before the cattle numbers were lowered and burning restrictions introduced.
“My grandfather used to burn all the time, we were given matches by the government and encouraged to burn,” Bluey said.
“But the flames never got any higher than about six inches or a foot as the fuel loads were not allowed to build up, not like it does today.”
Bluey pointed out where the early January bushfires had devastated the bush and where the flames had stopped as soon as the fire hit the grazed country.
He said bushfires were not unusual up there, but this year the flames went in a bit further than usual, which he blamed on a lack of fuel reduction burning.
“Along with our grazing, cattlemen are frowned upon to fuel reduction burn, we can get prosecuted. Our cattle are reducing bushfires, and this sticks out like balls on a dog,” he said.
Bluey is one of three licence holders who send their cows up the plains to eat sweet summer snowgrass before being taken back down to Ensay in autumn to calve and be rejoined.
He said the Commins were the third family to take over the run, where cattle graze the 12,000 hectare plain.
This year, he has about 300 head of cows grazing the plains, before he will saddle up his stock horses to drive the cattle back down to his 2000 hectare Hereford stud in Ensay in March.
Bluey said it usually took about three days to drive the cows up the mountain in November, depending on the weather.
“One mouthful of grass up there is worth four down here. Up there, they come back in pretty good order,” he said.
“It gets too dry down here (in Ensay), it gives us a chance to build up grass ready for winter. It’s a relief to get them away from here where we worry about running out of water and grass.”
Bluey said there were a few challenges facing the high country graziers, fearing that eventually the government would take their licences away.
However, he said feral animals such as deer and pigs had become large problems in the past few years, but “hundreds” of brumbies in particular were creating impacts on the environment.
“My grandfather used to let the odd thoroughbred mare up there to breed with the brumbies, he was allowed to do it because he was a run-holder,” he said.
“Brumbies compete with cows, and they overgraze and push their way into creeks, closer than cows do and brumbies walk the same tracks everyday which causes erosion.
“Pigs and deer are worse, but there are more horses up there then pigs and deer.”
Bluey said he occasionally thinks about leaving the land, but said “it’s in my blood and I can’t do it, I can’t abandon it”.
“In my younger days, I was up there all year round spending eight or nine weeks mustering with them in summer and looking for stragglers in winter. Now they lock it with a key in winter,” he said.
“We know this country, I ride the whole joint, I’ve done this my whole life. I know how to navigate it by the shape of the hills and trees.”