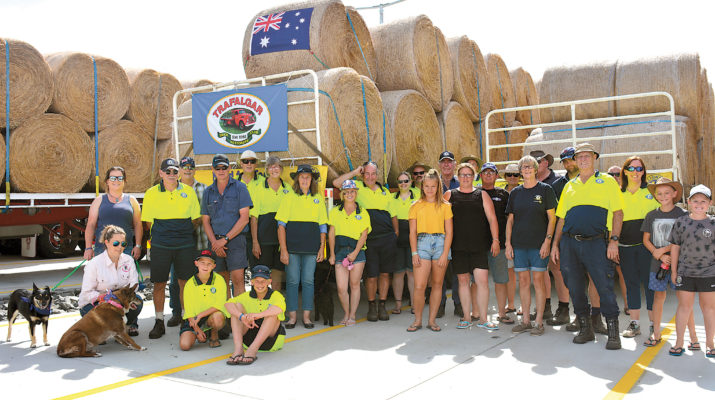 ENGIE entered into the spirit of Australia Day by helping out battling Gippsland farmers with a donation of 150 bales of hay for drought-starved livestock.
Six truck drivers swung by Hazelwood Power Station to collect the hay, after 340 bales were donated December in partnership with Regional Roads Victoria and Fulton Hogan.
The hay run convoy of about 18 trucks and utes was organised by the Lions Club Need for Feed to drop the feed off at district depots.
Drivers who donated their time and trucks to the cause started at Longwarry before stopping in Traralgon for an Australia Day breakfast catered by the local Lions Club.
Need for Feed organiser Don Petty said truckies headed to Wellington and East Gippsland shires to disperse the fodder and bags of donated household toiletries to farming families.
“You can’t get any more Australian than helping out fellow Australians, especially farmers. People from the city are more than happy to help farmers,” Mr Petty said.
“It was heartening heading up the highway in a convoy and people gave a toot and a wave when they passed.”
Mr Petty said conditions had worsened in recent weeks since volunteers were last in the area, and he compared Longford to a “dustbowl”.
“Farmers were really appreciative. It was really emotional – in some cases there were tears when they knew that people were thinking about them. This will help them out a little bit,” he said.
Mr Petty urged needy farmers to jump on the Need for Feed website to register for a helping hand.
“There are many people in need who haven’t applied and we don’t know who they are,” he said.
“We’ve got more hay to bring. We will continue to go out there. This reminds people the drought is still going and people are in dire straits.”
Hazelwood Rehabilitation Project communications manager Lauren Carey said the hay was cut as part of Hazelwood’s fire-preparedness.
“Clearing of vegetation in and around the mine is an important part of our annual fire-preparedness work with grassland managed through cattle grazing and hay baling,” Ms Carey said.
“Following an office discussion between several ENGIE Hazelwood personnel the concept to donate the bales suitable for fodder, came to life.”