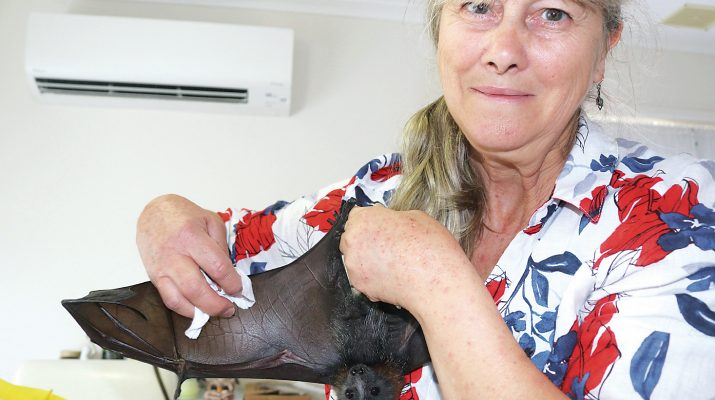 Gippsland wildlife carers are desperately seeking locals to rescue flying foxes as extreme heat leads to mass deaths in colonies at Maffra and Bairnsdale. Wildlife groups are also urging Gippsland backyard orchardists to select flying fox-friendly fruit tree netting so the protected native species won’t get caught up and suffer life-threatening injuries.  The Department of Environment, Land, Water and Planning declared a heat stress event on January 25, which wiped out about 1500 flying foxes in Bairnsdale and almost 970 in Maffra. Sale-based flying fox carer Lynne Amore took home 15 orphaned juveniles, and only 30 animals were rescued from Bairnsdale according to DELWP as government officials arrived to remove piles of dead animals. “We could only rescue what we could. A few were so far gone we had to leave them to die. We just cried. They simply die a horrible death, there’s no escape,” Ms Amore said. Consecutive days of hot weather is often fatal for flying foxes when they can be seen clustering at the bottom of trees to attempt reprieve from the heat. Ms Amore said there were only two flying fox specialists in Gippsland, so animals have to be transported to Melbourne for care, which stresses them out further. She called for prospective carers to undertake specialised training and get vaccinated against the rare Australian bat lyssavirus a minority of flying foxes have been known to carry. “Unless we have more people willing to go and help them, they will die,” Ms Amore said. DELWP compliance operations manager Peter Simpson said wildlife officers had been monitoring the colonies leading into the heat stress event, and is continuing to keep watch over them. “Prior to the heat stress event … misting the colonies with water was attempted but this caused disturbance to the colonies,” Mr Simpson said. Melbourne bat carer Tamsyn Hogarth said flying fox numbers were falling dramatically due to factors including native habitat loss pushing them into urban areas. Ms Hogarth said the long distance pollinators were essential for the health of native forests but many people held misconceptions about the threatened species. “If we don’t have bats, we don’t have gumtrees, they are like giant bees,” Ms Hogarth said. “People think they smell or they are dirty vermin. They call them rats with wings but they are clean animals.” Ms Hogarth said flying foxes were prone to being caught in barbed wire and tree netting which rips them to shreds and cuts off their circulation and urged people to use wildlife-approved netting. However, she warned people to never touch a flying fox unless they were vaccinated but said there was a post-exposure vaccination just in case. “They can present as being aggressive when they are in stress but this is because they are petrified,” she said. Anyone finding a flying fox in distress or interested in becoming a carer should contact Wildlife Victoria.