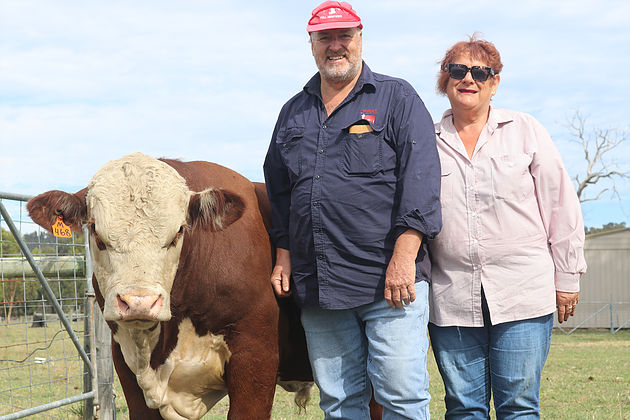 of Australia’s best beef genetics were on show at the start of February when nearly 200 studs from across Victoria and the Riverina took part in the 27th Stock and Land Beef Week.

Mr Phillips estimated $35 million worth of bulls was on display. Many will be put under the auction hammer in the upcoming autumn sales with some studs holding on-property auctions.

“Beef Week is the biggest event in Australia. It’s a low-cost, high-value marketing opportunity that allows people to visit properties without obligation, and compare what each breed has to offer,” Mr Phillips said.

“The biggest crowds were at studs with sales catalogues available on the day. Potential buyers could select bulls and then they can bid by phone or online on sales day.”

He said there were also plenty of private sales and one stud had sold three bulls by 10am.

Mr Phillips said Beef Week began as a five-day event but had become so successful it had grown to nine days to accommodate all the participating studs.

He said plans were already underway for next year’s event. Billy Creek Limousin principals Mark and Deb Reynolds took part in their sixth Beef Week and entered their 10 best heifers in the Royal Agricultural Society of Victoria Heifer Challenge.

“It’s been a very successful marketing exercise in terms of promoting the Limousin breed and Billy Creek as well,” Mr Reynolds said.

Mawarra Genetics Herefords had 90 bulls on show with 12 bulls destined for the national sales in Wodonga in May. The stud had a steady stream of visitors.

Callista Park Belgian Blue at Trafalgar sold all its females and two bulls during Beef Week while Warringa Herefords sold a young bull for $10,000 to Omeo Station on the morning of its open day.