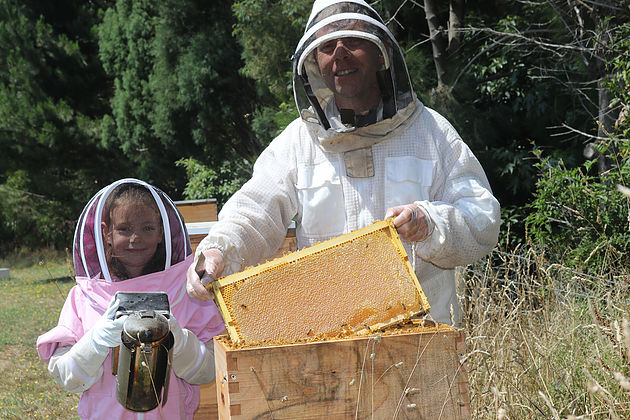 A Mirboo North beekeeper is backing a decision by a large hardware retail group
to phase-out a common pesticide that has been linked to killing bees.
Independent Hardware Group – which owns Mitre 10 – will phase out products that include a group of pesticides called neonicotinoids, by the end of 2018.
The move follows the decision of hardware giant Bunnings to take products containing neonicotinoids off its shelves.

South Gippsland Beekeepers Inc. president Peter Gatehouse said there was strong evidence that neonicotinoids could interfere with bee’s immune systems and could cause Colony Collapse Disorder, which has been occurring in Europe and the USA.

“Neonicotinoids are better taken off the shelves. It’s better to be cautious now rather than have detrimental effects in the future,” he said.

He said CCD caused foraging bees to disappear, meaning there were no bees to take resources back to the hive.

Mr Gatehouse said neonicotinoids were used to kill aphids but could affect bees through nectar and pollen.

He said bees were essential for the survival of the Australian horticulture industry with about 70 per cent of Australia’s fruit and vegetable crops pollinated by bees.

“Bees are a significant pollinator for our fruit and vegetable industry. If we don’t have bees, we don’t have things like almonds, oranges,” he said.

“They also produce honey which is a valuable food source.”

IHG released a statement last month saying it had been working closely with suppliers and authorities to understand concerns linked to the use of neonicotinoids.

“IHG is committed to ensuring the safe use of pesticides and protecting the bee population,” the statement said.

“As a result, IHG has taken the decision to phase out all products containing neonicotinoids from our distribution centre network, joint venture or company owned stores by the end of
2018.

“We have also been encouraging our independent members to support and align to this action.”

IHG said it was aware that neonicotinoids were banned in Europe, but were legal in Australia and had been deemed safe by the Australian Pesticides and Veterinary Medicines Authority.