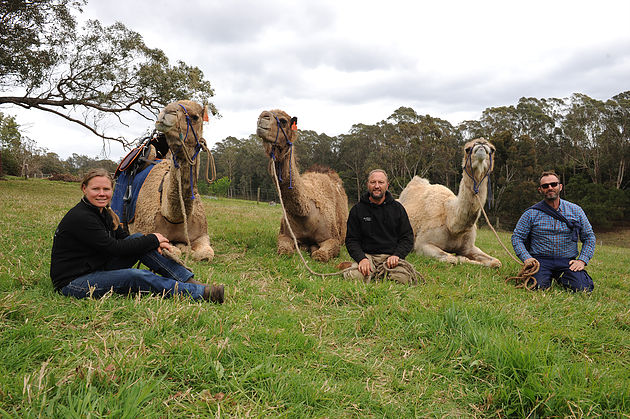 The death of Russell Osborne’s mother to a stroke on the tarmac of Athens International Airport following his sister’s wedding left him in a dark and dangerous place.
Life was difficult for the then Gold Coast English lecturer turned Gippsland camel farmer.
He was forced to organise his mother’s funeral and in the weeks after the tragic event, he felt lonely and depressed, becoming a self-described “recluse”.
“At her funeral there were hundreds of people there and I wondered who they were because I hadn’t lived at home for many years,” Mr Osborne told The Farmer.
“I found out they were part of the Women’s Auxilary for the Royal Children’s Hospital … something my mum had been heavily involved in.”
Confined to a dark and dank room following the funeral and sharing an apartment with his then flatmate, John, Mr Osborne had hit a low and “had no idea what to do”.
But one afternoon, he was sitting around the table when he had a thought that would go on to change his life.
“’I’m going to walk around Australia with a bunch of camels to raise money for a children’s charity’ I told my housemate,” he said.
“That next day I left the house and realised I’d actually made a decision … but being a lecturer of English I was further away from camels than anything.”
It sparked a 13-year journey to prepare, train and learn about camels for a journey that would make headlines across the world for all the right reasons.
The journey started in Darwin, down through the west to Alice Springs and into Victoria, along the bay before reaching the Royal Children’s Hospital with the goal of raising $100,000 for the Moira Kelly Creating Hope Foundation.
“It just so happened I arrived at the hospital a day after Trishna and Krishna were separated,” Mr Osborne said.
“The expedition was called the Darwin to Melbourne Thank You Camel Expedition to thank Moira for her lifetime of saving kids lives and we didn’t know whether or not the twins would live.”
The journey took two years, Ewith eight feral camels who had been trained in the lead up, and covered more than 6000 kilometres on foot.
It was during the expedition through central Australia that Mr Osborne met Tara Lea – at the time a natural horsemanship trainer – who would go onto become his partner in work and in life.
“I was travelling the country at the time and I got to South Australia and I heard about this camel man that had walked from Darwin to Melbourne,” Ms Lea, who was Bairnsdale born and bred, said jokingly.
“I thought that was a really dumb idea.
“I was a horse girl but I was introduced to Russell and he encouraged me to interact with the camels and I just fell in love with them. First it was the camels and then a few months after I thought ‘yeah, he’s alright’.”
The couple now run Australian Camels out of Toorloo Arm in east Gippsland, about eight kilometres out of Lakes Entrance heading towards Cann River.
The purpose of the company, which has daily camel walks along the beach, is to educate people across the world on the behaviours and instincts of camels in an attempt to train and handle them for a range of purposes.
“We teach what the camel is capable of and how we interact with camels as human beings from a perspective of creating a bond and a friendship that is strong,” Mr Osborne said.
“You’re working with the animal, the animal isn’t working for you and you’re not working for the animal, you’re working together.”