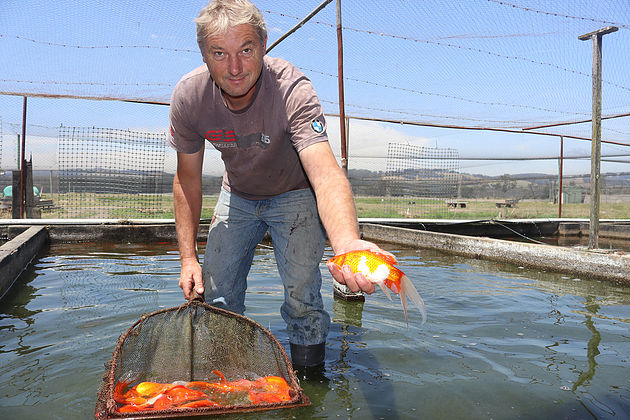 Pet goldfish are not as popular as they were 10 years ago with fewer people keeping them, according to Boolarra goldfish breeder Russell Wucherpfenning.

Boolarra Fish Farm is the biggest goldfish producer in Australia. At its peak, it shifted four million fish in 2007, but this plummeted to 1.6m fish in the past 12 months.

He forecasts it will stabilise to around two million a year.

“It’s dropped industrywide. In 2006, there were around 22 million ornamental fish being imported, but this dropped to 11 million in the past 12 months. It’s a fad no longer popular,”

According to the Australian Veterinary Association pet-ownership figures, there were 8.7 million pet fish being kept in 2016, but this was down by 2.4 million compared to 2013.

Mr Wucherpfenning said he believes it’s because people are too busy to be bothered maintaining fish tanks, and kids preferred staring at screens instead of staring at fish.

“Pond fish have also dropped off. I think it’s because people are living in large houses with no backyards. We also compete against imported goldfish from south-east Asia,” he said.

Boolarra Fish Farm was established in 1952 when Mr Wucherpfenning’s grandfather came from Germany to work at the Morwell briquette factory.

He met a man in the pet fish trade and began breeding tropical fish for sale before establishing himself on 25 acres in Boolarra.

Boolarra Fish Farm now sits on 300 acres with 150 dams for breeding and hatching five varieties of goldfish, selling to large wholesalers around Australia as well as a Morwell aquarium.

Breeding stock are carefully selected each year for their brilliant colours, fin length and body shape.

Prime breeding fish can grow to half a kilo, or 45cm, and live around seven years.

Young fish are sold at six months of age, when they are o

ld enough to handle being graded and sorted, ready for the pet shops.

“And it’s not true that they have a three-second brain. When they hear the feed tractor they flock over, because they know the sound – they remember.”