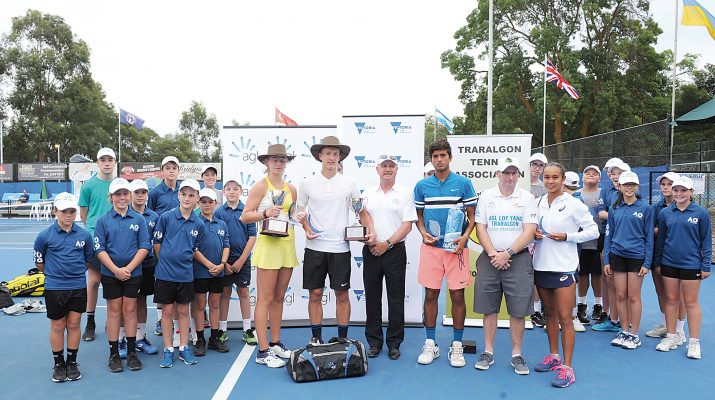 By Kate Withers TWO new champions have etched their names onto the Traralgon Junior International honour board with Czech Jiri Lehecka claiming the boys’ title in emphatic fashion and top seed Clara Tauson of Denmark hoisting the girls’ trophy. Lehecka has joined an illustrious honour roll of boys champions after steamrolling his way to a straight sets win over US teen Zane Khan, 6-3, 6-2. The 11th seed burst out of the blocks and set the tone early, holding to love in the opening game before snagging the first break of serve to go 3-1 up. Khan was forced into retrieval mode and struggled to match the Czech powerhouse whose heavy hitting was causing headaches. Khan scrapped back enough balls from well beyond the baseline to force errors and hold serve for the remainder of the set but grew frustrated and couldn’t breakthrough as Lehecka held to take the first, 6-3. With one hand on the trophy and in one of the most dominant displays of the tournament, the Czech fired his way to a double break and 4-1 lead. Khan managed to hold serve once more before curtains as Lehecka closed out the match in just over an hour. The title win comes ahead of this week’s Australian Open Juniors, which the newly-crowned champion has in his sights. “I’m very happy to be here and stand as the winner here,” Lehecka said. “It was a very tough week here and I’m very happy that I won. It was a great final with my opponent and I think this was great preparation for Melbourne.” On the girls’ side of the draw, top seed Clara Tauson overcame Canadian Leylah Fernandez in a clinical, straight sets display, 6-2, 6-3. It didn’t take the big-hitting Dane long to stamp her authority on the match, breaking the Fernandez serve after a drawn out game to go 2-0 up. Tauson dwarfed her opponent in more ways the one, using her 182-centimetre frame to pepper winners on both sides and clinch the double break. At 2-5 and serving to stay in the set, Fernandez saved multiple break points before eventually succumbing to give Tauson the first. The top seed carried on with the rout, burying her opponent in the second to close out the match in straight sets. “I would like to thank all the people that came to watch, my dad slash coach and my other coach,” Tauson said. Valiant in defeat, Fernandez said Traralgon was a “beautiful tournament” and gave plaudits to her opponent for a dominant display. “Clara had an amazing week and played really well,” Fernandez said.