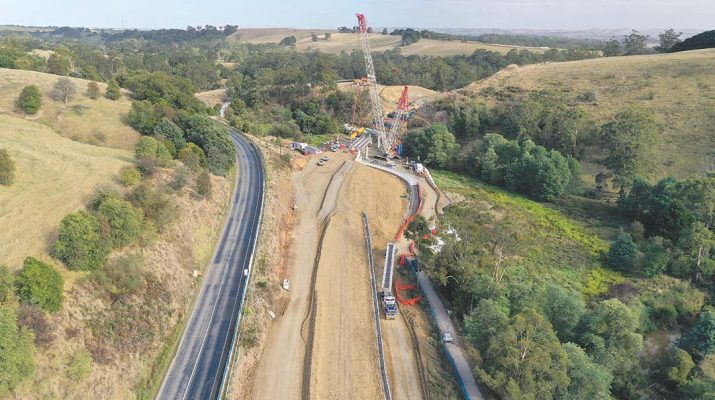 Across March, the team installed 24 beams to form the second new bridge over the Tarwin River and Great Southern Rail Trail.

These bridges will link the new highway alignment with the existing highway.

This follows the construction of the first bridge over the Tarwin River in December 2021.

During the days when the trail was completely closed, a shuttle bus operated between Koonwarra and Meeniyan each half hour.

Once these works are complete, there will be a further three days at the end of April where the rail trail will close again in order to install barriers on the bridge overhead.

Electronic signage will be in place at each end of the trail with up-to-date information. A shuttle bus will be running during the closure for pedestrians to cross to the other side of the trail.

The beams have been manufactured by Victorian based company Westkon Precast.

Crews will now pour the concrete to form the bridge deck, they will then install the bridge barriers.

During this time, work will be undertaken to connect the new alignment into the existing highway, including upgrading the intersections at Minns Road and Old Koonwarra-Meeniyan Road.

Once complete this year, the South Gippsland Highway will improve road safety along the stretch of the highway, known as the Black Spur, and will result in a reduction in the severity and frequency of crashes.

“We’re upgrading the South Gippsland Highway between Koonwarra and Meeniyan to improve safety and ease congestion for the thousands of motorists who travel this stretch of road every day.

We thank locals for their patience as crews get in to complete these works and deliver this important project to benefit all locals,” Labor Member for Eastern Victoria Jane Garrett said.

“This is a huge milestone for the team, completing the beam lifts for the two bridges over the Tarwin River. The bridges will link the new, safer South Gippsland Highway alignment with the current highway as we look towards opening the new alignment later this year,” he said.

Gippsland Farmer requested an update on possible safety upgrades between Meeniyan and Yarram, and received this response.

“As a part of the funding for the upgrade for the South Gippsland Highway, Major Road Projects Victoria, in partnership with the Regional Alliance partner Fulton Hogan, is delivering a suite of safety upgrades to the highway between Meeniyan and Yarram,” a MRPV spokesperson said.

“These safety upgrades are being delivered in three stages, with the first two stages completed and the third stage expected to be completed in June 2022.”