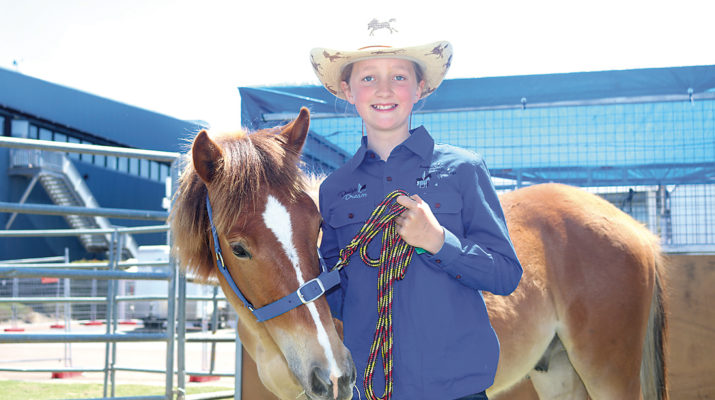 An 11-year-old Pakenham Upper horse lover Matilda De Haan has transformed a high country brumby colt into her best mate as part of the Equitana Brumby Challenge.
Trainers taking part in the challenge had 150 days to take a wild and unhandled brumby and gentle them into a willing partner to demonstrate that Australia’s wild horses can make great companions.
Some call them vermin and want them culled, others want them protected – but one 11-year-old girl and her brumby foal are part of a group proving that Australia’s wild horses make great companions.
Pakenham Upper horse lover Matilda De Haan took part in the Brumby Challenge youth section at Equitana with her 14-month-old brumby VBA Taffy.
Selected trainers had 150 days to gentle their wild and untouched brumby into a willing partner and demonstrate this in a series of challenges in front of a judging panel at Equitana.
Taffy was in-utero when his dam and her herd were caught off the Alps and wound up at the sale yards, destined to end up as dog food.
The Victorian Brumby Association saved her and let her give birth to Taffy at the VBA brumby sanctuary near Ballarat before Matilda drew the colt in a ballot for the competition.
Earlier this year, the Victorian government released plans to reduce some of the 25,000 brumbies in the Alpine National Park and eradicate the 60 to 100 horses from the Bogong High Plains.
Shocking photos on social media showed starving and dead brumbies linked to harsh conditions in the high country and starving brumbies being shot in the Barmah National Park cut off from grazing land.
Matilda’s mum Jackie said the brumby challenge offered these horses a second chance.
She said with the help of an expert mentor, they found the brumby to be a very trainable and smart horse that looks to humans as the herd leader.
“They definitely bond with humans. Brumbies are more sociable than domestic horses, and they like being with you, they are a clean slate, they trust you a lot,” Jackie said.
“It’s good for kids to get involved. It keeps them grounded, you can’t just push a button. You need patience and empathy with the animal and step back and figure out why if something doesn’t work.”
Taffy had a few competition-day nerves at Equitana, and like any baby, took a bit to settle down, but was able to demonstrate being walked-out, loaded into a float and taken into an arena.
Amie Power rode some basic ridden dressage on VBA Brolga but jumped off to give him some confidence in front of the large crowd.
“He hadn’t been in this environment before and was starting to get a bit upset. He was happy to go forward once I got off him,” she said.
The experienced show and event rider said Brolga was her first brumby and she found him easier to break in than a domestic breed.
Brolga was passively trapped with his bachelor herd off Kosciuszko and his herd leader VBA Coolibah was also coincidentally at the challenge with another trainer.
“There’s a lot of talk about culling them but this shows how good they are as a riding horse. You can see they are not wild and crazy,” Ms Power said.
VBA president Colleen O’Brien said the competition showed brumbies could adapt to different trainers and head into a range of disciplines.
“If people see what they can do then it helps find more homes for these horses. People assume they are inbred but it’s important to see they are not,” Ms O’Brien said.
Ms O’Brien said the VBA supported managing wild horse numbers with passive trapping and fertility controls but the bush was still an important place for the folkloric horse.
“One of the biggest weeds we have are introduced grasses, and brumbies graze these selectively. For a long time we’ve assumed introduced is bad and native is good,” she said.
“But if we open our minds we can see they are contributing positively and add to our precious natural values.”