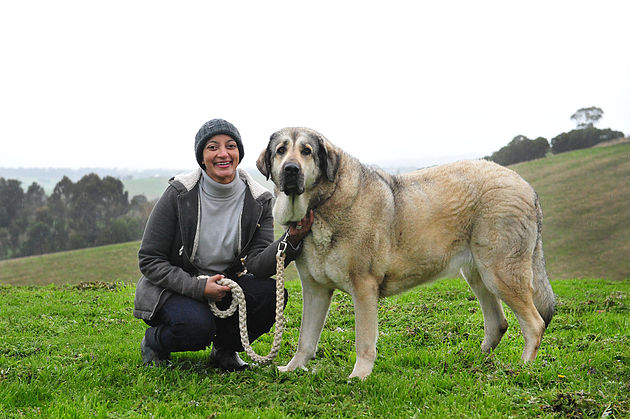 Poowong resident Jan Richards has combined her two passions, photography and Anatolian Shepherd dogs, to create a one-of-a-kind photographic collection that captures the essence of the livestock guardians.

Ms Richards said she hoped to showcase the breed’s natural progression and uniqueness through the photograph compilation.

“They’re very focused and are independent thinkers. They think in an adaptive way, like ‘if I can’t do it this way, how can I get around it’ kind of way,” Ms Richards said.

“They’re so much fun and have such a sense of humour. They’re both charming and wicked.”

Ms Richards is an award-winning photographer and has lived and taken photos all over the world, but said in the introduction to the book that this project was “one of the greatest challenges I’ve ever had”.

“(The project) definitely started because of Ariel, my dog. People were taking to my photographs and people were buying them and I was being commissioned,” Ms Richards said.

“I realised I had quite a few photographs and decided to do something with them, so I went out and concertedly tried to photograph as many (Anatolian shepherd dogs) as I could.”

Ms Richards said she hoped the book would help communicate to farmers the value of the livestock guardians on farms.

“You have a reliable guardian for your livestock who is an independent thinker and doesn’t need much food once they’ve developed physically. You certainly do while they’re growing, though.

“They’re another way of not having to worry about your livestock… they protect your investment.”

Anatolian shepherd dogs are not herding dogs, but guardian dogs.

They can stand up to 80cm and typically weigh between 40 and 70kg.

“They need to be on huge, or at least substantial properties to be doing their work. They’re not corner-block dogs,” Ms Richards said.

Ms Richards said the breed could be quite ‘exhausting’ and difficult.

“They teach you how to be a better person. If you use humor and patience and love with them, and they offer you the same.

“They have to be raised with animals, generally speaking. Because they’re fairly intelligent they have a kinship with other animals.”

A proportion of the proceeds from the sale of Ms Richards’ photography book will go towards the Australian Anatolian Rescue Foundation.

“The book was designed for people to keep coming back to it, to pick it up and see more things in the pages of photos every time,” Ms Richards said.

She said for farmers interested in investing in an Anatolian Shepherd dog, a breeder would be the best place to purchase one.

Ms Richard’s book can be found at Here