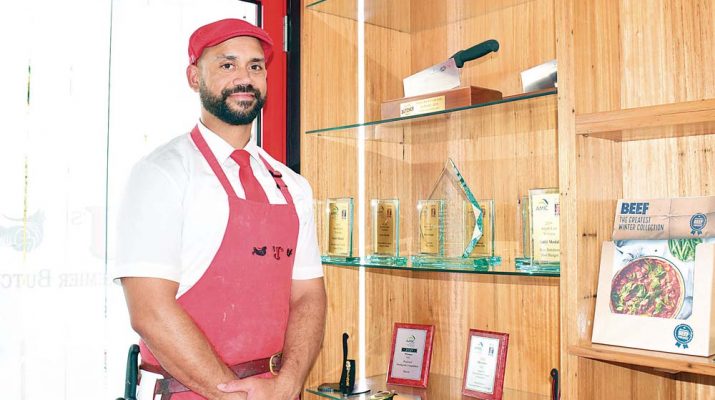 Mr Young, co-owner of 3J’s Butchers, is no stranger to these events and has competed in a number of state and national competitions.

In 2019, he won first place in the Butcher Wars competition at Meatstock, a Music and Barbecue Festival.

Mr Young was selected to join the Australian Butchers Team and will compete in the WBC at Sacramento, USA in September.

He will team up with five other butchers from around Australia for the competition, and together they will compete against 15 countries.

The WBC is conducted over a three hour and 15 minute period.

Competitors are presented with a beef, pork, lamb and five chickens and are instructed to transform them into a display.

Competitors can bring their own seasonings, marinades and garnishes to the competition and use them to create products that are able to be sold in a retail setting and can be cooked.

Products should push boundaries and be inspiring.

Mr Young, who now lives in the Latrobe Valley, grew up in Inverloch.

He started a butcher’s apprenticeship after school and hasn’t looked back.

Ten years ago, he and two people other purchased 3J’s.

“I made the move up here when I took over the shop 10 years ago, we’ve been going strong. We’ve refurbished and turned the shop into what it is now,” he said.

Mr Young has competed in a number of competitions, but this is the first time he will attend the WBC.

“It’s fast-paced, it’s very hot … in terms of the World Butchers’ Challenge that one is next level. There’s so many industry leaders and the best of the best,” he said.

“Going up against them is something that I’ve never gotten to do before … so it’s going to be pretty intense..

The Australian Butchers Team will spend this year preparing to compete, and will have a number of rehearsals before the big day.

“There’s a lot to do, there’s a cow, a lamb, a pig, a lot of poultry and we all have our individual roles,” Mr Young said.

Mr Young said he has received a lot of support from friends, family and 3J’s customers.

“I put it on our socials and we’ve been getting a lot of praise and a lot of love, which has been really, really good,” he said.

“It was a call that I wasn’t really expecting, and when I got it was an immediate yes. Just being able to go and showcase the craft, and brush shoulders with so many other industry leaders is a chance that doesn’t come around that often.

“The actual craft style of what we do here is slowly starting to phase out, but it’s a way of getting in touch with your roots and trying to show the craftsmanship behind it.”