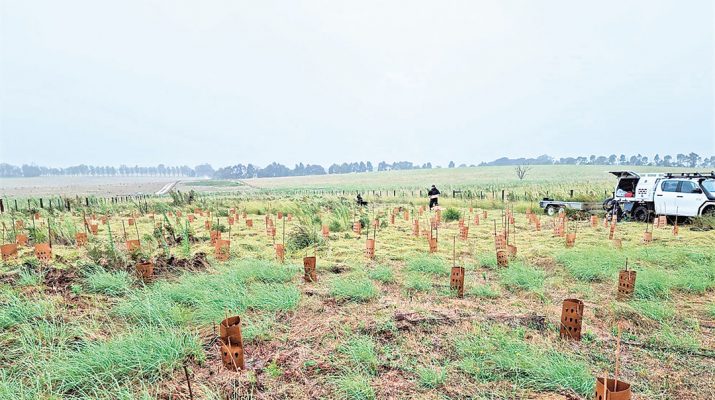 The problems of climate change and biodiversity loss are now widely recognised.

Many farmers around Australia are helping to address these problems through planting of trees, or at least conserving already treed areas on their properties.

On one small (80 hectare) property at Perry Bridge, an ambitious revegetation project is under way.

The intention is to redevelop the entire property as a haven for native flora and fauna, while greatly increasing its capacity for carbon storage.

The property, known as “Fernlea”, is owned by Canberra couple Allan and Wendy Hahn.

It was purchased by Mr Hahn’s ancestors in 1888 and has been in the family ever since.

The couple visit Gippsland regularly to work on the project, but have also engaged a small Paynesville-based company, Gondwanan Ecosystems Management, to pursue activities on a day-to-day basis.

The project began in earnest in mid-2018, when a decision was made to de-stock the property, which had long been used for cattle agistment.

“Historically, the property has been over-cleared and over-grazed by cattle, and this has favoured establishment of invasive weeds,” Mr Brightman said.

“We’re now seeking to eliminate the weeds and replace them with native vegetation that once typified the area.”

For environmental reasons, an effort is being made to achieve weed elimination without using chemical herbicides.

Burning off, followed by direct seeding, has been partly successful, but manual digging out of weeds seems to be producing the best long-term results. The problem is that it’s a slow and labour-intensive task.

Mr Hahn, who has a 40-year history as a scientist in Australia’s high-performance sports system, believes that it’s as physically hard as many sports, and even suggests that there may be scope for development of an “enviro-sports” movement.

During the past four years, about 4000 seedlings have been planted on the property, with some of the earliest plantings having now become trees of more than two metres in height.

In addition, since the de-stocking of the property, quite a few native plants have appeared spontaneously.

“We’re acting on a theory that the native plants will gradually modify the soil in ways that will make it less hospitable to invasive weeds,” Mr Brightman explained.

“If that proves correct, the need for manual weed removal will gradually diminish.”

To monitor the effects of the project, regular plant, bird and frog surveys are being conducted.

So far, over 40 native plant species have been recorded, including the slender wire lily, which is rare in Victoria.

Mr Brightman said that last spring, the display of wildflowers on the property was truly spectacular.

Almost 50 bird species have been documented, along with six frog species, and there have been some interesting sightings of reptiles and insects.

It is expected that species diversity will increase as the project progresses.

The Hahns have ambitions for the property to become a site for the controlled re-introduction of locally extinct species, but Wendy Hahn acknowledges there is still a long way to go.

“The long-term vision is to plant around 50,000 seedlings, ideally within the next four to five years,” Mrs Hahn said.

“After the 2019-20 bushfires, tube stock became hard to get, because available supplies were needed for forest regeneration.

“We purchased all we could, but also started growing plants from seed in our own suburban garden, for later transport to the property.

“Several family members and friends are now doing likewise, and we’re trying to recruit more people to help us in this way.”

For anyone interested in the project, an Open Day will be held on the property on Saturday, June 18.

Further details can be found online at fernleafuture.wordpress.com