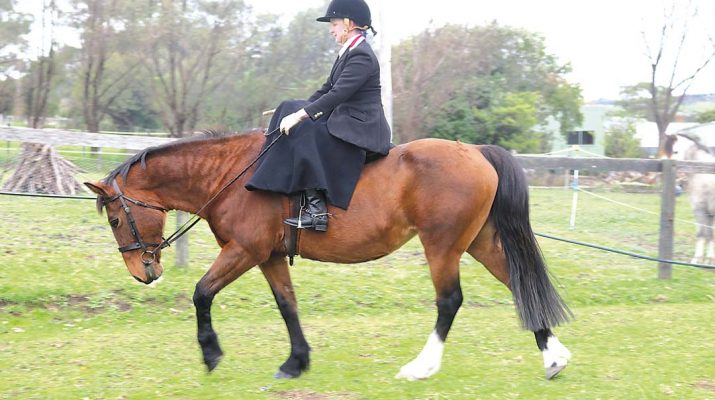 A Tynong horsewoman is reviving the traditions of a near long forgotten equestrian discipline on a horse believed to be once running wild in the Barmah Forest.

Kate Fremlin is one of a few Victorian equestriennes who rides in a side saddle, taking part in fox hunting and showing on her brumby mare It’s Possible.

Ms Fremlin had always wanted to have a crack at side saddle and pursued her dream after taking her mount to a come and try day with Broadford-based instructor Stacey Rusic.

“Side saddle was high on my bucket list of horse riding adventures. I loved the novelty of it, getting to ride in a dress was something so elegant,” Ms Fremlin said.

“The first time I had a go, it felt so bizarre but after 20 minutes, it felt natural, the saddle is very secure and gives you a lot of support. My horse was terrific, she took to it like a duck to water.”

The side saddle dates back to antiquity but developed in the middle ages to enable a woman in skirts to ride a horse while maintaining her chastity.

The discipline died off in the 20th century and is now regarded as a niche sport, with the hard to find saddles regarded as antiques or hidden away in attics.

Ms Fremlin found her side saddle online from America, originally made in England she estimated it is about a century old. She purchased her specialised riding habit –or woollen skirt – second hand.

She has since gone on to wow judges in the turnout ring at the Pakenham and Royal Melbourne shows, winning sashes up against competitors riding astride.

“It’s a great conversation starter at shows, people come up and ask about it. It creates a challenge for the judges as it’s like comparing apples and oranges,” she said.

“I never fail to get a kick out of putting all the gear on, the habit is beautiful to wear. It’s toasty warm and great fun. My horse is so kind to me, she makes it a pleasure.”

Instructor Stacy Rusic is only one of three qualified side saddle teachers in Australia and has taught “hundreds” of riders at clinics and pony club rallies.

Ms Rusic said the same principles applied as sitting astride, with the rider sitting centrally and straight in the saddle, replacing the right leg with a cane to guide – not hit – the horse.

She said historically, side sale allowed women to undertake the same activities as a man on a horse and has also allowed riders with a disability to get in the saddle.

Ms Rusic pointed to Belgian Paralympian dressage rider Barbara Minneci who has monoplegia in her left leg and muscle loss in her right leg.

“Within 15 minutes, my students are cantering around. It’s not more difficult, it’s just a different style of riding.”