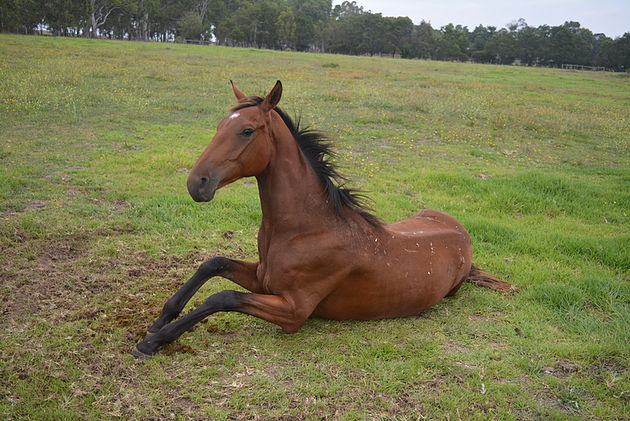 A valuable horse destined for a national showjumping career had to be euthanised after he was spooked by illegal fireworks set off near his paddock on New Year’s Eve.

Stratford horse breeder Denis Crane said the two-year-old Warmblood gelding named Blackall Park Toronto had injuries so severe, he thought Toronto had broken his pelvis after rogue fireworks were set off around 9.30pm.

Mr Crane nursed Toronto for three weeks before the decision was made to put him down as he was deteriorating rapidly.

Toronto was in a paddock with 13 horses when the noise from the fireworks set them into a frenzied panic causing two animals to slip over as they tore around.

The breeder of elite performance horses said he went out to check on the horses again in the morning, and found Toronto in severe pain.

“I didn’t think this horse would survive. The vet thinks he had a major smash. He had skin off his hip and was stiff through the pelvis,” Mr Crane said.

“He was spending more time lying down than standing up. He hops around on three legs. He has lost so much condition, he looks like an RSPCA case.”

He said since the accident, others had told him of other incidents involving illegal fireworks in the Stratford area on New Year’s Eve that caused stress to animals including dogs running away in fright.

“Fireworks cause more trouble than they are worth. People in the city are told to keep their dogs and cats inside, but we had no warning that they were going off,” he said.

“Many people have said that I should try to recover damages from the people who had the illegal fireworks but it can’t be proved that the injury was a direct result.

“Similarly, with the fireworks, unless the police can actually apprehend the culprits in the act

nothing can be done.”

She said any incidents needed to be reported to the police.

Sale police Sergeant Mark Barrett said there were no reports of illegal fireworks or animals incidents in the Stratford area on New Year’s Eve.