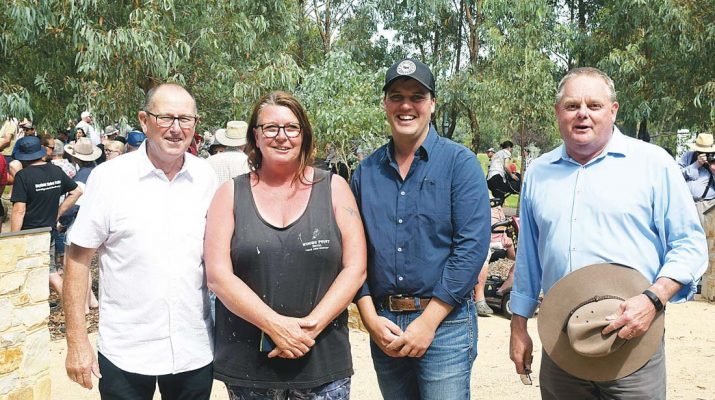 THE industry most synonymous with Heyfield was celebrated to the fullest last month.

After a 27-year hiatus, the Heyfield Timber Festival made a triumphant return, with people flocking from across the state for two days of festivities.

Working under the slogan ‘From the hills to the mills and beyond’, the festival gave those involved in the timber industry an opportunity to come together and share their passion, all the while providing further validation that timber was indeed part of the very fabric of the country town.

Generations of the industry overlapped at the festival, with some even from families who have given decades worth of service in the mills or in the forests.

Not even those ravished by age could hide their immense pride at being a former custodian of Heyfield timber, with one chap even decking out his motorised scooter to look like a logging truck – complete with trailer.

On Saturday, wood chop demonstrations, heritage drought horses and vintage machinery were just some of the attractions on display at the Gordon Street Reserve, before a twilight market was held as the sun went down.

Town pride was perhaps in earnest the following day, as people lined George and Temple Streets to cheer on a parade of trucks and earth moving equipment. Truck drivers were only too happy to toot their horns as they passed through.

Amid all the celebrations the most poignant moment for most in attendance may well have been after the parade, when festival-goers gathered at the Timber Workers Memorial to remember industry greats.

As crowds gathered around the memorial, Member for Narracan Gary Blackwood and Member for Gippsland East Tim Bull spoke about the importance of the timber industry to Heyfield and the flow on-effects that have benefitted the town.

“The percentage of people that live in this town that work in the industry is incredible.

“If you take the timber industry out of Heyfield, you close the pub, you finish the footy club and netball club, the primary schools are struggling for numbers.”

The MPs also made particular mention of Australian Sustainable Hardwoods managing director Vince Hurley and late Wellington Shire councillor Malcolm Hole, generally regarded as the unofficial mayor of Heyfield, for their advocacy in supporting the industry and serving the community.

As well as a celebration of timber, the festival also provided a nod to the classic country mentality of just getting the job done no matter the workload.

Felicia Stevenson of the Heyfield Timber Festival committee said she was rapt with how well the weekend went.

“It has been amazing, just the crowds of people we had, the support, nothing really went wrong. A small committee, but we pulled it off,” she said.

“A lot of work to be done, families getting involved to help us out where they could, I am over the moon.

“The highlight has been the families just coming out and having fun.”

Ms Stevenson said uncertainty surrounding the state government’s plan to phase out native timber harvesting by 2030 provided the spark to bring the festival back to life after nearly three decades.

“The festival was to give families something to look forward to,” she said.

“That is what Heyfield is – timber. It is what is important to a lot of us around here. My husband and sons are loggers, I work in a timber mill.

“Hopefully the timber industry goes on and people have got their jobs that are stable.”

With the industry threatened by the state government’s decision, Mr Bull hoped the festival caught the attention of those at the top.

“The turnout on both Saturday and Sunday has been an extraordinary vote of confidence in the continuation of the timber industry,” he said.

“To have people here, thousands, from all across Victoria, in particular right across Gippsland, has been so heartening to see.

“To have this festival back up and running after 27 years, have this level of turnout is incredible, and full credit to Felicia and her organising committee.

“The fabric of the township relies so heavily on the timber industry so we need to get this decision reversed.”