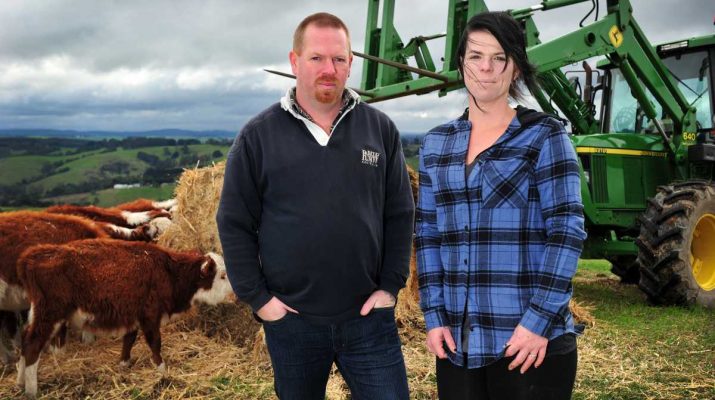 A Mirboo beef farmer is warning about a deadly bovine disease which is being exacerbated due to the amount of animals in poor condition being relocated from drought-affected areas.

Kat Gration is nursing a crop of young Herefords with Theileria, a tick-borne disease which has no cure caused by parasites entering the bloodstream through bush tick saliva.

The 30 animals were brought down in a poor condition from drought-stricken New South Wales, and so far the Grations have lost 12 to the disease.

This included three who were so weak they drowned in a creek, and another two died shortly after.

Ms Gration said she first noticed her cattle affected by Theileria about four months ago, when one suddenly collapsed and died when being moved, and three more went down and couldn’t get up.

“Two of them died within two or three days, the other was down for 17 days, we manually tried to lift her she was so weak,” Ms Gration said.

Ms Gration said the vet assessed the cow’s gums which appeared anaemic, and a blood sample revealed a case of Theileria.

“The vet said every single one of our cows has it, but the weakest will die from it as it causes them to be low on [red blood] cells,” she said.

“It’s becoming more serious taken that we have a feed crisis and a lack of high protein feed, they are losing body condition.”

Tarwin cattle vet Tom Gilheany said Theileria first appeared in Gippsland in 2012, but parasites could live dormant in a cow’s system for years, until sparked by stress and suppression to the immune system.

He said stress from calving, poor nutrition or by being transported from areas with less feed could bring on symptoms, in which cattle appear weak and have pale or yellow gums.

“Most herds in south Gippsland have an immunity, but we see problems when cows are brought in from other areas who don’t have an immunity. This is where we see the most problems,” Dr Gilheany said.

“It’s located to farms where new cattle are being introduced and exposed to ticks on that property, but most cows are immune if exposed from a young age.”

Dr Gilheany said it was vital not to stress out cattle down with the disease, but although there was no vaccine, valuable animals could be given a blood transfusion.

Melbourne University veterinary parasitology associate professor Abdul Jabbar said Gippsland was a hot spot for Theileria, due to climatic conditions and the presence of bush ticks.

He said the relatively-new disease first appeared in 2006 and has so far has cost the meat industry $20 million.