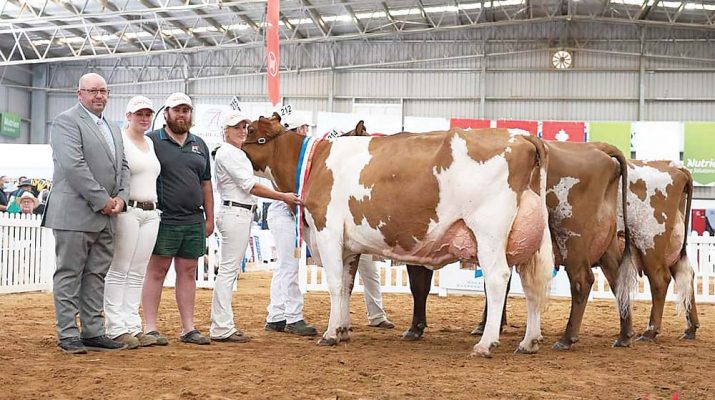 A NILMA dairy farmer has shown she has a good eye for a cow when she won the top judging award at International Dairy Week in Tatura last month.
Imogen Steiner won the Victorian Agricultural Shows Dairy Cattle Judging Competition at IDW against six other competitors, paving her way to the national titles at the Sydney Royal in April.
The top showie also came home with a broad sash on the 12-year-old Ayrshire Shady Maiden who won grand champion in show, owned with her partner Karl Munden.
Ms Steiner had only moved to Australia a year ago to be with her partner where they milk 600 Ayrshire, Holsteins, Jersey and Brown Swiss cows on Munden farms.
She grew up with dairy cattle in the lush hills near Waikato and went on to become a senior Ayrshire judge in New Zealand.
“I’m on cloud nine, this was my first judging win in Australia. It was daunting at first, especially being a Kiwi as I didn’t have a lot of Australian judging under my belt,” Ms Steiner said.
“This will give me a boost to judge more cattle in Australia and I may start to travel internationally for judging appointments.”
Ms Steiner had to judge sets of four cows in three classes, looking at Holsteins, Guernseys and Ayrshires.
She was assessed by over judge Ben Govett who was looking at how she placed her cattle in a line up as well as her explainer notes on why she made these decisions.
“They were very difficult classes to judge as they were very similar animals and there were not a lot of points between them, but I placed them the way I saw them and on what I enjoy seeing in a cow,” Ms Steiner said.
“I like to see a lot of capacity in my cows, with a lot of heart room. I also like to see veins in the udder, a nice udder attachment and strong ligaments.
“It’s about the style of the animal, the more correct or if it fits my vision of a perfect dairy cow.”
Ms Steiner said it was important to have expert judges in the industry to help
farmers make important breeding choices for the animals.
“We need to get this right as it influences the industry as a whole,” she said.
Ms Steiner said breeding and showing Ayrshires had always been a hobby, stating the breed handled the steep terrain in her home country.
She said her top show cow Shady Maiden had recently won Supreme Exhibit at the Sale All Breeds Spectacular before winning the grand champion at IDW.
“She is a tremendous cow for a 12-year-old. She has beautiful venation, she is a long and balanced dairy cow and she has a lot of style. When she walks in the ring, she owns it,” she said.