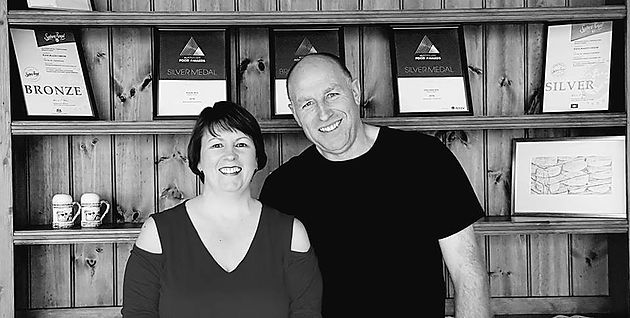 Fish Creek organic dairy farmers Carolyn and Paul Pangrazzi couldn’t predict 10 years ago taking a cheese-making course at their local community house would lead them to produce some of the best cheeses in the country.

This year, the couple entered four cheeses into the Royal Agricultural Society of Victoria’s Australian Food Awards, and four medals came back.

The past two years of selling their produce has been a steep learning curve for the couple as they’ve learned to stir, hoop and set the cheeses using milk from their own cows.

“Every time you bring milk into the factory it’s different, and that’s being a cheesemaker, you get to know the product and you know the feel,” Carolyn said.

“Like how you know when a cake is cooked when you tap it on the top, we know when (the cheese) is ready to hoop.”

Many early starts went into producing the Hoddle Camembert, which won the gold medal in the mould surface or washed rind category of the Australian Food Awards.

“It’s not like making a cake, popping it in the oven and walking away.

“It takes a whole day to make a batch of cheese.”

Their dairy has been certified organic for more than 20 years – a business decision they made preceding their three daughters, and eventually, two grandchildren.

“We didn’t want to bring children into a chemical filled world. We wanted to do the best we could,” Carolyn said.

Paul and Carolyn have now increased their production of the hand-stirred Hoddle Camembert from 70 kilograms per month, to 150kg per week, and joke the biggest challenge has been learning to manage the Pangrazzi Cheese Facebook page.

Paul said satisfaction came from knowing somebody down the track was eating and enjoying their produce, and that the milk from their cows was turned into a “wonderful product in the end”.

“(The award) is an indication of how we’re travelling. We know where we’re standing in the marketplace,” Paul said.

The cheesemakers were highly appreciative of the support from their community, and acknowledged the help from the greengrocers in Foster and Fish Creek.