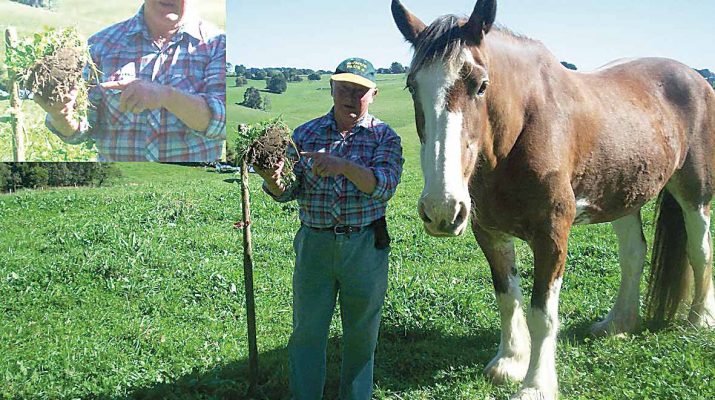 A Poowong farmer is urging agricultural producers to nurture their soil to create a solid foundation on which to run their farming business. Natural soil consultant Jeff Clark said soil was a complex asset that needed to be understood as it formed a foundation that would determine future income from the land. “If you build a house, the foundation goes down first and this supports all the structure on top. A poor foundation gives you many problems for the life of the building,” Mr Clark said. Mr Clark spent 45 years as a dairy farmer and said he “pushed the land to the limit” before he went in search of solutions to the problems created by traditional farming methods. He has created a humus product made of lignite, Humusplus4, that is rich with living bacteria and puts nutrients back into the soil. He described soil bacteria as workers that break down organic matter, soil and clay particles and turn it into nutrients for the plants. The plants in turn process these nutrients into fodder. The deeper-rooted pasture varieties bring the minerals and trace elements to the surface to keep animals healthy. He said using urea-based products such as superphosphates had stripped the soil of its living bacteria, causing high speed growth but low quality pastures. “Over the past 100 years, we have degraded our soils unwittingly by ploughing, chemical spraying and using chemical fertilisers to boost the growth,” he said. “Because the grass is fed on the surface, the roots do not need to go deep and consequentially, do not have access to the minerals and trace elements. The health of your animals depends on these extras.” He said use of organic matter and humus would correct these problems and allow the soil to regenerate to the condition that it was before the heavy use of agricultural chemicals. Mr Clark said he had successfully trialled his humus product on broad acre crops around Narrandera. He said one lucerne farmer went from growing very little, through to getting four cuts in one season after four years of putting carbon back into the soil. Mr Clark said he was able to carry 80-head of beef cattle on his 38 hectare property and keep them in top nick through winter on homegrown fodder. “The cattle stay healthier because they are getting the minerals they need out of the pasture. They are a lot quieter and butchers tell me the meat is more tender,” he said. r Clark has a background in Landcare and does not charge for his on-farm soil consultancies as he is happy to share his knowledge. For more information, or to arrange for a soil discussion, visit humusplus4.com.au.