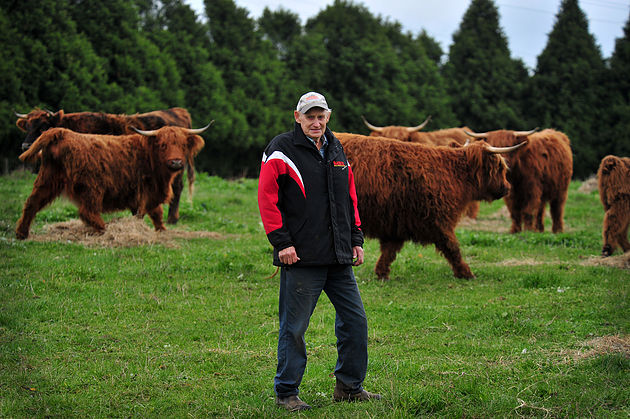 Some of the rolling green hills around Warragul could easily be mistaken for those typical of the United Kingdom, particularly when there are shaggy-coated Scottish Highlander cattle roaming about.

“The dairy business fell in a heap and I didn’t have any agistment, so I thought it was time we had some of our own cattle. I looked around, we have a small farm, and thought we might need an elite type of cattle for a stud business.”

Mr. Roberts said there were a number of reasons he chose the Scottish Highlander breed.

“They’re not very common. They’re a rugged beast, they absolutely survive and thrive on dry, rough feed,” he said.

“They’re excellent mothers and we’ve had no calving problems at all. They’re very low maintenance and they’re very unique compared to other breeds.”

While it may look like the cattle can’t see because of the long strands of shaggy hair covering their eyes, Mr Roberts said they could see very well.

“The benefit of hair growing over their eyes is that they’re not prone to pink eye or disease in the summer time,” he said.

Aside from the stud, Mr. Roberts said he used the livestock for his family’s own consumption.

“They produce lean beef, which is particularly delicious to eat.”

“We also send the hides to Ballarat and tan them. They make wonderful rugs and mats,” he said.

Mr. Roberts said he was in the process of converting from horned animals to poled, or non-horned, cattle.

“They are naturally docile animals and fairly easy to handle, but it’s easier when they don’t have horns,” he said.