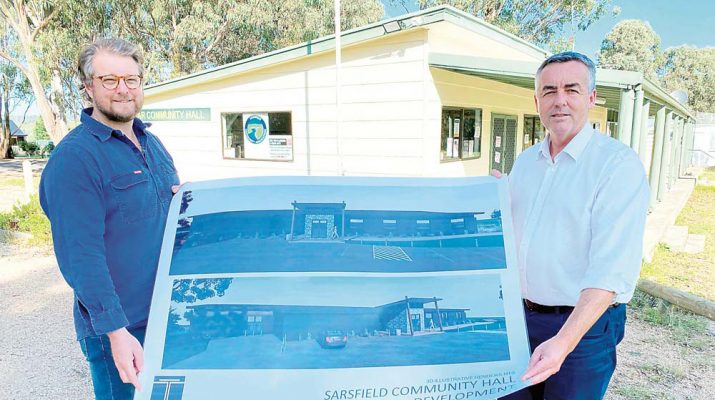 Residents of Sarsfield are celebrating after their funding application was finally approved by the federal government last month.

The regional community has been granted $3.6 million as part of the Black Saturday Bushfire Recovery (BSBR) fund to redevelop their local hall after a belated intervention by the Deputy Prime Minister Barnaby Joyce.

“We are incredibly grateful to Darren Chester, our local MP, who worked tirelessly behind the scenes to achieve this result,” Mr Hof said.

“We know that East Gippsland Shire Council and Bushfire Recovery Victoria staff were also busy advocating for us and the other affected communities, and we can’t thank them enough for their support.”

“Most importantly, we want to thank the entire community, who sent many messages of support.

“It was awesome to see so many people advocating for us on an individual level.”

The community of Ensay was also awarded funds of $2.3 million, which will go towards the refurbishment of the local Recreation Reserve.

Federal Member for Gippsland Darren Chester welcomed the funding decisions for both communities, and Mr Joyce’s assistance in the matter.

“This is a common-sense outcome and a victory for these fire-impacted community groups,” Mr Chester said.

“I have been working with the community groups and the Deputy Prime Minister’s office to have the projects properly and fairly assessed.

“The Sarsfield and Ensay recreation reserve projects were recommended as being meritorious for consideration as a Community Development Grant.

“I want to thank the Deputy Prime Minister’s office for working a professional and constructive manner to deliver a fair outcome for East Gippslanders.

“Make no mistake, these grants would not have been secured without the Deputy Prime Minister’s support.”

The announcement comes after the communities of Sarsfield, Ensay and Wairewa were initially denied access to the BSBR fund, as previously reported by Gippsland Farmer.

The rejection of funding in all three communities was attributed to their Australian Business Numbers, which identified them as a “state government entity”.

At the time, Mr Chester described the situation as “farcical” and urged the Emergency Management Minister, Senator Bridget McKenzie to intervene.

Wairewa is still yet to receive any grants as part of the BSBR scheme, a point highlighted by Mr Hof.

“We are really concerned for our friends in areas such as Buchan and Wairewa, who have been struggling to find funds for vital bushfire recovery projects. We want them to know that we’ll keep fighting for them to have the support that they so desperately need,” Mr Hof said.

Mr Hof expects work on the redevelopment of Sarsfield’s Ian Haggar Community Hall to begin “as soon as possible.”