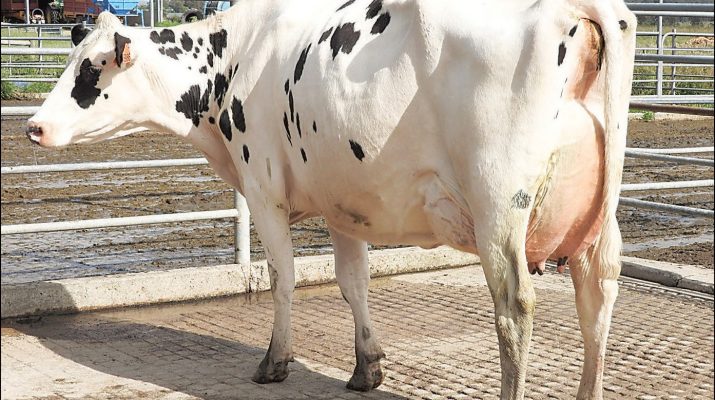 A POOWONG South farming family cleaned out the top honours at this year’s Leading Edge Genetics On-Farm Competition, which attracted 427 head of dairy cattle from 58 Gippsland farms.
The on-farm competition in its 12th year is one of the largest of its kind in Australia.
The lunchtime presentation was held at the Drouin Golf Club by judge Lindsay Marshall from Finley, at the event attended by 120 farmers and 15 agribusiness representatives.
Overall Champion and winning the three year old class was entry 5986 sired by Mogul and owned by Bill, Faye, Brett and Jodi Loughridge of Poowong North.
This well balanced dairy cow on her second lactation was a standout for Mr Marshall.
“Her dairy frame and outstanding udder made her the obvious cow to lead this class,” Mr Marshall said.
The Loughridge family also took out the coveted Group Class of three animals by the same sire, with a winning pen of three- year-old Mogul daughters.
The same family walked away with most successful exhibitor prize.
Mr Marshall said it was a very busy four days of judging in Gippsland looking at most breeds of dairy cattle.
“It was certainly a competition of great depth. Each farm had animals of tremendous quality,” Mr Marshall said.
“There could only be one winner in each class unfortunately. But for me I was look- ing for the most correct, well balanced cow.” The two-year-old class was won by Warren Lace and Carrie Ralston with their Jersey 2569 sired by Grant.
“She was the most correct and balanced cow in a very strong class,” Mr Marshall said.
A Guthrie daughter 927 owned by the Thomson family at Fish Creek won the four and five year-old class, and amazed the judge with her “tremendous balance and unbelievable udder”.
“Once I saw her I knew she would be a cow that was going to be hard to get around. Interestingly her Samite daughter won the two-year-old class in 2020,” Mr Marshall said.
The highest placed non-registered Holstein breeder was a tie between Peter, Helen and Michael Thomson at Fish Creek and Ben Elliott of Jindivick.
Leading Edge Genetics owner Brad Aitken said he “marvelled” at the quality of cattle presented in the competition each year.
“It truly has become one of the leading on-farm competitions here in Australia,” Mr Aitken said.
“Based on the large attendance today, there is no doubting there is not only great fellowship in our dairy cattle industry, but also great pride that everyone has in their animals.”