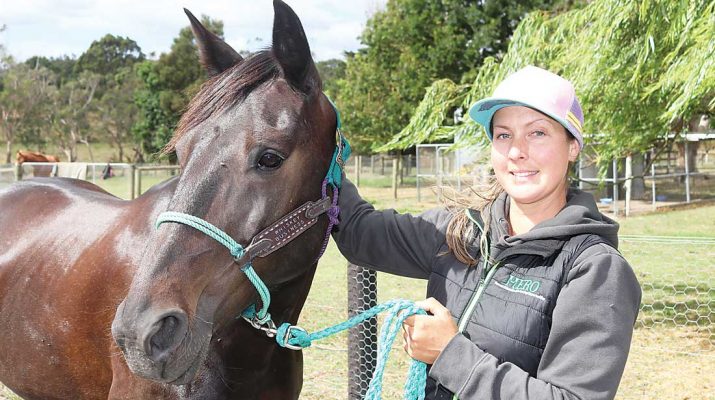 Warragul horsewoman Kylee Paull is proving how versatile her ex-harness racing horse is off the track with her Standardbred gelding Minty who has become a top novelties mount.

The pair have been selected as Harness Racing Victoria Hero Ambassadors, to promote retirement pathways for Standardbreds exiting racing.

Ms Paull said Minty was only one of two Standardbreds involved in the Sporting Horse Association, taking part in mixed novelty events and cowboy sports.

The rider comes from a harness racing family and bred Minty with her father, but decided to keep him due to his great nature when she found out how versatile he was.

The 12-year-old former trotter who raced under the name Whisky Business had a fairly ordinary career on the racetrack after 50 starts, with one win in a ridden Monte race.

Minty has since proven himself as champion in the world of western sports, taking on the more traditional breeds of quarter horses and stockhorses.

Ms Paull said she gets “a few funny looks” from other competitors turning up with a Standardbred, but people cheer for Minty when he can get a cow around a course.

He has also been successful in the show ring by taking home a blue ribbon at the Melbourne Royal, and has had crack at endurance riding.

“He is one horse who does everything. He has great manners and character, he is always wonderful to have around. He has a general willingness to give anything a try,” Ms Paull said.

“He is a little firecracker and he likes to go fast, he is not a plodder. He is already going before you ask him to go.”

Ms Paull has been selected to represent Australia in the US after qualifying for the world barrel racing finals on Minty, who was named 2020 sporting horse rookie of the year.

Ms Paul is encouraging others to consider taking on a Standardbred, and is currently eyeing re-homing on a new one off the track.

“Maybe people put them in them in the too hard basket as they take a bit of work, but they are so versatile and quiet as they deal with so much when they are racing, they are virtually bomb-proof,” she said.