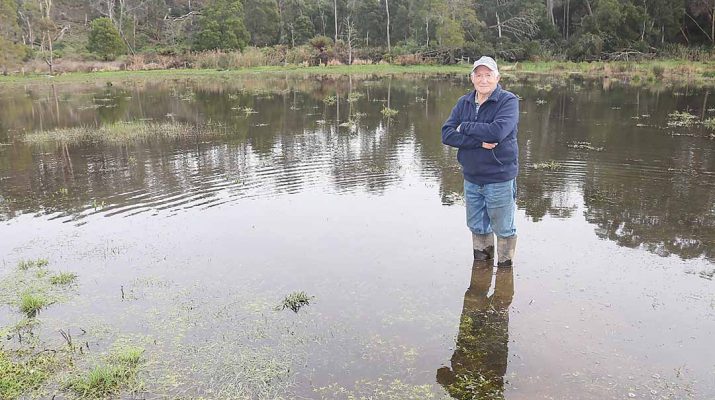 A Gormandale cattle farmer is still watching floodwaters over his paddocks which have not subsided even after 12 months since devastating storms and floods hit the region.

Sam Bye raises steer on his 50-hectare property along the Merriman Creek, but is unable to use about a third of the land as it remains inundated after the creek banks washed away.

Mr Bye is one of hundreds of landholders still clearing properties, with others facing ongoing trauma a year after a savage storm ripped through Victoria, leaving a trail of destruction.

Parts of Gippsland were torn to shreds on June 9 last year, hammered by intense winds and pouring rain that caused flooding, giant trees ripped from their roots and sheds torn apart like cardboard.

Mr Bye had been farming the same property for the past 50 years and said it was not unusual for the creek to flood and cover his paddocks, but it would usually recede the following day.

He said last year, the volume of floodwater was so strong that it washed the away the banks and fences so the creek now flows and settles over his – and his neighbours’ – paddocks. “The water has been there that long now. I’ve had to knock back my cattle numbers, so it’s knocked me back from making money,” Mr Bye said.

“It’s too wet to access it to get somebody out to fence it as there’s too much water, I’m now hoping for it to dry out, but it will be a major job and an expensive job to stop the creek running out..

Meanwhile, some low lying residents who were flooded out are finding mould, mud or debris in their homes, while others are battling insurers or nervously watch creek levels in heavy rain.

It comes as Emergency Management Victoria (EMV) is yet to hand down the findings of a review into the failures of the emergency warning system that left residents knee deep in water a year ago.

According to Latrobe City Council, 2250 local residents were registered for help with temporary accommodation, insurance assistance or dangerous tree removal.

Latrobe City has assessed 44 outstanding landslides on local roads, but many of these have worsened in heavy rain and need state government funding before council can carry out complex repairs.

Boolarra South orchardists Michael and Sandy Boka marked exactly a year to the day of the storm anniversary when contractors to came to clear heavy fallen and dangerous trees from their property.

The couple estimated about 100 giant eucalypts came down that night, leaving massive holes in the ground, trashing fences and orchard infrastructure.

Similar scenes still bare out across the ranges with countless, maybe hundreds-of-thousands of trees down, paddocks apart up by landslides and ruined roads awaiting repair.

“It had been depressing going up our driveway and seeing all these logs still on the ground, there’s only so much we could do by ourselves,” Ms Boka said.

“We had a big wind about a week ago, it was gusting through the night and I thought ‘please no’, it took me back to that memory and I pray and hope it won’t happen again.” Latrobe City South Ward Community District Recovery Committee chair John Harris said many landowners were unable to tackle the volume or size of downed trees on private land by themselves.

He said they were awaiting details on potential state government funding for fallen tree salvaging on private land, but were also hoping to carry out a survey to ascertain what resources were needed.

“Some of the trees are a metre in diameter and an ordinary chainsaw can’t deal with this, they need specialised machinery,” Mr Harris said.

“Many people at the time feared that trees still standing were in real danger of coming down the next time around..

Latrobe City Mayor Kellie O’Callaghan said she was aware of the ongoing impacts as recovery efforts continue a year on.

Cr O’Callaghan said Latrobe City remained in talks with EMV and local residents to address resources for ongoing recovery and mitigation for future events. “We are still hearing from community members with concerns, they worry and get nervous watching forecasts more than they normally would,” Cr O’Callaghan said.

“There is a persistent reminder of what that event was, and this is significantly challenging..

EMV has assured that the results of a statewide Extreme Weather Event Community Report is in its final stages and will be handed-down shortly. An EMV spokesperson acknowledged many communities were still recovering and the department was continuing to do all it could to support them.

“Victoria’s emergency management sector will continue to learn and improve together as we strive to do our best working with the Victorian community before, during and after emergencies,” the spokesperson told Gippsland Farmer.

“We are working through the lessons with relevant agencies, departments and stakeholders and are committed to progressing any key priorities outlined in the community report.”