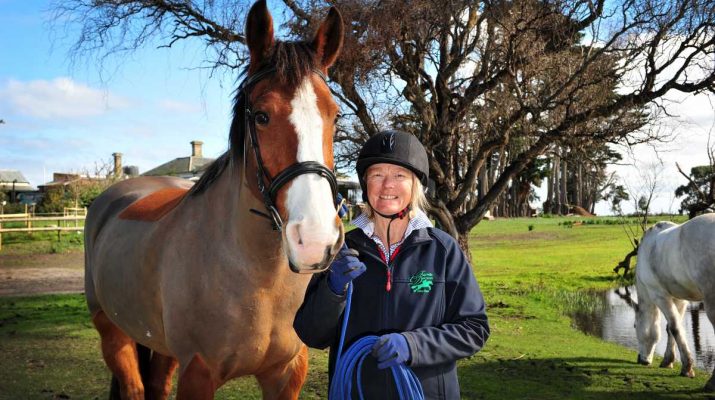 A SOUTH Gippsland horsewoman with a passion for teaching people with disabilities has been awarded a Queen’s Birthday Order of Australia medal for services to the horse industry and people with a disability.

Sally Francis has been a team assistant at a swag of Paralympics, world para-equestrian championships and world equestrian games, including supporting rider Joann Formosa win a gold medal on her warmblood Worldwide PB at London in 2012.

Ms Francis was taught to ride by her mum who was a top level riding coach. She grew up on her family’s riding school in Mt Eliza before they moved to Tooradin.

The keen equestrian became a talented young rider and went from strength to strength hitting the heights at pony club as a 12-year-old on her pony Paddy.

“This was pretty cool for a 12-year-old, but it was my mum and Paddy, my wonderful grey pony, who enabled me to do that. I owe a lot to that wonderful horse,” Ms Francis said.

Ms Francis discovered her love for teaching and became an Equestrian Australia and Riding for the Disabled coach as well as an RDA integration officer developing access for people with disabilities.

“Riding brings so much to people with disabilities. Being with a horse is hard to describe. There is the ability to communicate with a horse and it opens up access to terrain and areas you may not get to,” she said.

“Riding uses hundreds of impulses in our body. We develop our core strength and use our legs and we are mindful to communicate with the horse in the best way we can.”

Ms Francis said it was “magical” to be part of the team to watch Ms Formosa win Paralympic gold for Australia in dressage.

“It was a big highlight. It’s so wonderful to see them go out into the main arena and perform at their personal best. It’s unbelievable. You can’t describe getting a gold medal,” she said.

“It’s such a team effort and a relief to tick all the boxes that contributed to showing the world we had the best rider and the best horse on the day.”

Ms Francis retired from the international arena and is focusing on teaching riders of all levels at her Tooradin property and developing a trail riding
challenge course for people with disabilities.

“It was an incredible honour to win the Order of Australia medal. I thank all my mentors and especially my horses who helped me along the way,” Ms
Francis said.

“My mother never won an Order of Australia medal, so to me, it’s a joint award with my mum.”