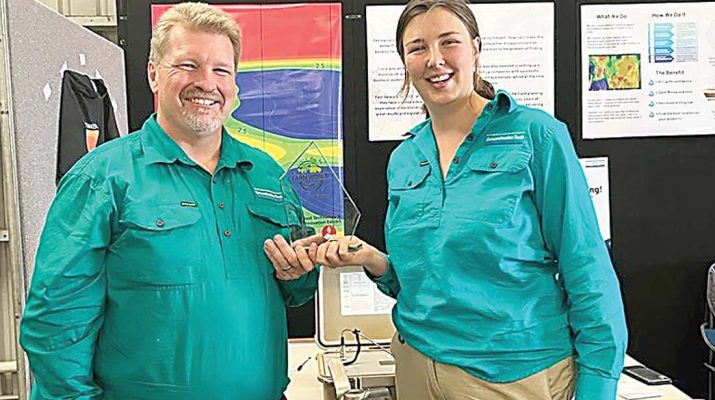 A SALE family is solving an age-old problem for farmers with new technology that detects exactly where to drill a bore on properties without the need for guess work.

James and Lucie Nicolson started up Groundwater Technology about a year ago with a new system that uses seismoelectricity to identify groundwater to depths of up to 400 metres.

The system sends a soundwave underground that can detect free flowing water that then generates a small electrical currant that is picked up a receiver.

Ms Nicolson said the system was already being used in the USA before they decided to try it out in Australia with success after six months of research and development.

“No one was using this in Australia. James was working for a company in Queensland that kept drilling dry bores, we thought there has to be a better way,” Ms Nicolson said.

“Even if you drill a dry bore, you still have to pay for it and many farmers can’t afford to have a second go. With this, you only have to drill once. We can’t believe no one else has done this.” Ms Nicolson said many methods were still relying on the old technique of water divining, or using hydro geological surveys which can detect water on a property, but may not identify where to drill.

She said they had been using the new system with success through Victoria and NSW on both smaller acreages for domestic bores, through to larger irrigation bores.

“We can see different aquifers at different levels. Some aquifers dry out in drought and some bores stop pumping in drought,” she said.

“We can see deep aquifers that are harder to find and won’t dry out in a drought.”

The small company is in the midst of taking on more employees to keep up with demand, with the aim to expand across Australia. They are also hoping to break into the off-grid market.

The pair were also recognised by taking out the best technology and innovation exhibit at Farm World last month.

“For us it’s so exciting. There is a need and people want this. We got such a positive response at Farm World,” Ms Nicolson said.