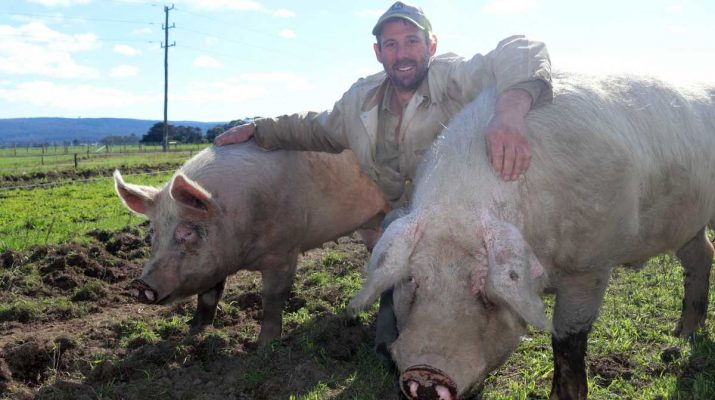 A GLENGARRY North free range pig farm is bucking the trend in an industry facing an exodus of Australian pork producers.

Eaglehawk Creek Farm Produce has ditched the system and gone solo with the support of the local community which buys its products straight from the farm gate.

According to the Victorian Farmers Federation, pig production in Australia has dropped about 10 per cent in the past two years with a larger percentage of mainly smaller farmers leaving the industry.

Owners Chris and Geena Pettigrove started out a couple of years ago keeping pigs in paddocks but saw the writing on the wall when saleyards and abattoirs processing pigs began closing.

“Some said we were mad to get into pigs. We are in the midst of a really struggling industry and we are in a drought,” Mr Pettigrove
said.

“A number of pig farmers we know are struggling with feed prices and finding an outlet to sell their pigs. We were forced to either stop, or start doing things differently.”

The Pettigroves cut out the middle-man and sell packaged pork under their own label through orders taken on Facebook and through local farmers markets, and have a customer waiting list.

They keep inputs down by feeding their pigs with food waste and by-products from local bakeries and factories.

The pigs are allowed to wallow freely in paddocks, which is a winner with local kids and families who pull up to watch the animals play and bathe in the sun.

“Free range pork tastes better, a shedded pig would never have the same diet variety that ours do. They get to dig for worms and grubs,” Geena said.

“We let the community come and see the piglets. You can’t get closer to your food source than that.”

However, the couple are still feeling the pinch and are not minimising the challenges of spending a lot on fuel sourcing feed and buying water and grain in summer due to drought.

“People still want to eat Australian bacon. We sell our excess pigs to a Melbourne spit pig business but he is struggling to find pigs, as so many farms have closed down,” Mr Pettigrove said.

“The industry needs to change. It’s either people like us taking control of our own markets and become niche, or get bigger to compete with the multi-nationals so you don’t get swallowed up.”

VFF pig group president Tim Kingma said the industry was riding on the back of two bad years starting with an oversupply resulting in low prices and
drought pushing up grain inputs.

However, he said prices had started to become buoyant again, coupled with a recent and devastating outbreak of swine flu in China.

Mr Kingma said he was aware of family farmers who were finding ways to survive by banding together to sell as a group.

“Twelve months ago producers rang me to say they were getting out. This was their lifestyle and they had farmed all their life. It’s heartbreaking for communities and families,” Mr Kingma said.

“I’m not certain how quickly people will come back to the industry. There is no certainty in this year’s grain crops, but hopefully for those who want to come back it will be more sustainable.”