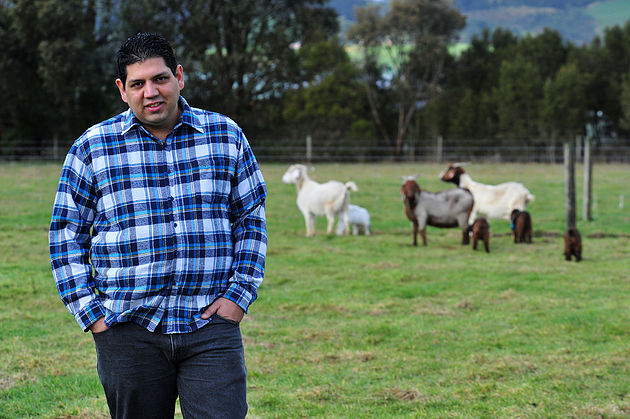 It started out as a way to keep the grass down.

But as Gippsland farmer David Lyons would soon find out, breeding goats would become a small but profitable operation.

Mr Lyons, known as ‘Wombat’, runs a herd of about 80 adult Boer goats across two properties at Willow Grove and Yarragon along with his mother and brother.

He says the domestic demand for goat, both for meat and livestock, has been on a steady incline since the family purchased their first property at Yarragon seven years ago.

As the youth worker explained, the family has dreams of one day expanding the operation in an attempt to become one of Gippsland’s biggest suppliers of domestic goat meat.
“There is definitely a demand,” Mr Lyons said.

“When we entered the industry in 2010 there was little international export, but it’s really developed over the past seven years to South East Asia who haven’t had this kind of goat before.”

But while Mr Lyons doesn’t specialise in export, he said the recent incline in popularity for the Boer breed had started a trend in local markets too, likening it to a “flow-on effect”.

“When we were doing local markets, people would come from all over to get our meat because most butchers stock only feral goat and the flavour is slightly different.”

He explained how the taste of goat often varied depending on the location of where it was raised.

“The South Australian one is often promoted as salt bush goat because it’s been raised on salt bush,” Mr Lyons explained.

“Whereas the grass flavoured goat is a more baseline flavour…but everyone who eats goat remembers the taste.

“It doesn’t have the fat though so where mutton and lamb is a very fatty meat, a goat’s layer of fat is on the other side so the butchers can almost completely remove it.”

The recent incline in popularity and demand for goat meat, particularly in Gippsland, has seen the prices on the market rise due to a lack of supply, according to Mr Lyons.

“If you look across the farmers of goats across Gippsland you can get anywhere from $150 to $200 for a breeding commercial Boer and for a full blood show Boer you’re looking between $200 to $250,” Mr Lyons said.

“Prices are quite high at the moment and that’s because no one can meet the domestic demands, we all have waiting lists.”

The family runs 80 head between the 135 acre property at Willow Grove and 30 acre property at Yarragon but have been hindered from expanding their operation following a number of setbacks, including two floods several years ago.

“So we’ve had to slow down breeding because of the impacts it’s had on the property, which have really challenged us.”

But despite the dilemmas Mr Lyons said the ultimate plan was to run a herd of 500 goats, producing about 1000 kids a year.

He said it would give the family a consistent supply to “line up” restaurants and cafes with a week-by-week delivery across Gippsland.