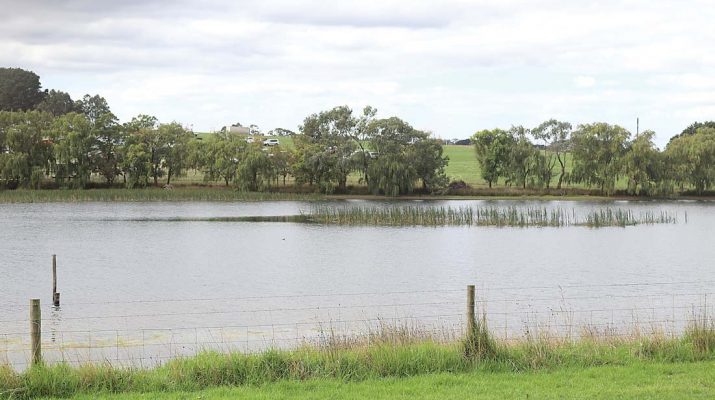 Lardner Park will host an innovative floating solar trial that will show landowners how to use farm dams to generate renewable energy.

The state government has allocated almost $210,000 for a 50 kilowatt floating solar demonstration project on the Lardner Park dam.

The trial will be carried out by the Gippsland Climate Change Network in collaboration with Lardner Park to show farmers the benefits of the technology.

GCCN chief executive officer Darren McCubbin said the project would go to tender and be completed by the end of the year, in time to be up and running by next year’s Farm World.

Mr McCubbin said the technology was in its infancy in Australia but was established internationally, with the world’s largest floating solar farm in Singapore.

He said floating solar can be installed on any landlocked water body such as dams without the need to take up farmland, taking advantage of underutilised space.

“All you do is put it onto a pontoon and push it onto the lake and it floats away. You can move it around, and there are lots of advantages,” Mr McCubbin said.

“We have a huge ability to connect with farmers at Lardner Park, they will be able to see it in operation.

“It’s not like we are doing anything experimental. But farmers haven’t seen anything like this in the past.” Mr McCubbin said floating solar panels can help stop water from heating up and reduce evaporation or algal blooms by acting as a sort of large umbrella over the water.

He said the technology could potentially be rolled out as part of Latrobe Valley mine rehabilitation plans to create pit lakes in the open cuts.

“We will start with the dam at Lardner Park and then we hope to move into other dams in Gippsland and consider other sites,” he said.

“We’d like to see a manufacturing industry set up in the Latrobe Valley if we can get enough of this happening..

Lardner Park already has a 100 kilowatt solar system installed on its Baw Baw pavilion, and the floating solar will help bolster energy for its major events.

Lardner Park chief executive officer Craig Debnam said he hoped for this to the first stage of several renewables projects in the pipeline, such as hydro and wind.