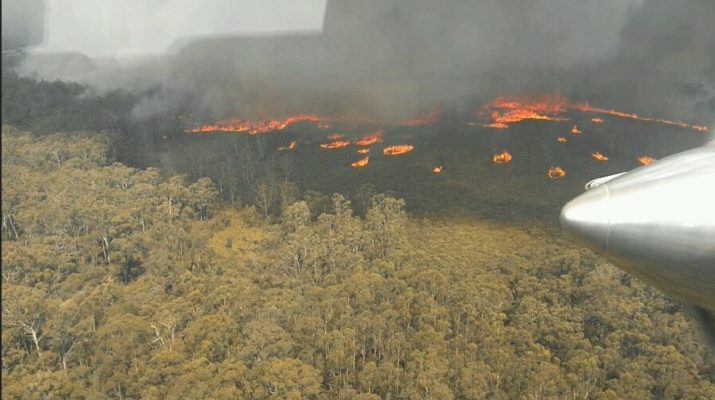 OUT of control bushfires swept across East Gippsland, burning towns twice in the space of a week, causing destruction and harm to the region’s people, animals and the environment.
After a horror New Year’s Eve, when the world watched as 4000 people huddled on Mallacoota beach as their homes and holiday houses burnt in front of them, the region braced for the worst on January 4.
Forecast high winds and high temperatures coupled with low humidity resulted in a day of total fire ban.
Towns such as Sarsfield, Nicholson, Bruthen, Buchan, Gelantipy and Genoa, which suffered significant loss of property and stock on Monday, shaped up to face yet another fire threat.
Many communities suffered through power and communication outages, and contaminated or dwindling water supplies.
With months of record-breaking drought leaving the region’s fuel loads devastatingly dry, a state of disaster was declared by Premier Daniel Andrews, covering six local government areas, including Wellington Shire.
Wellington’s northern communities, including Dargo, Valencia Creek and Glenmaggie were included in the fire’s potential impact area.
Many East Gippsland residents heeded warnings to evacuate, doing so via escorted convoys from the far reaches of the region.
Fortunately, there was no great movement in the fire front to the region’s south as predicted, but there was a large run of fire in northern parts of the region.
The weather change that swept through in the early afternoon brought strong, erratic winds, fanning fires and putting pressure on firefighters, who were directed to protect assets, life and critical infrastructure.
As spot fires occurred in the Omeo Valley and surrounding areas, the Australian Defence Force extracted 42 people from Omeo by helicopter.
People were told not to drink the water in Omeo.
Dargo residents were encouraged to leave via Sale, rather than Bairnsdale.
The cooler conditions and clearing smoke on January 5 allowed air lift evacuations in Mallacoota of more than 300 people.
While in general across the region the bushfires were less active, the Marthavale fire, north of Bairnsdale, showed some significant activity and moved slightly west.
The fire had a 20km edge, with Emergency Management Commissioner Andrew Crisp underscoring the importance of staying vigilant, even during cooler weather.
The Australian Defence Force descended on the area, with navy ships evacuating 1100 isolated people from Mallacoota.
Black Hawk helicopters have been based in RAAF Base, East Sale, transporting firefighters from Bairnsdale to Mallacoota, and taking the injured and vulnerable back from Mallacoota to East Sale to receive emergency services support.
Three Chinook helicopters are also based in Sale, evacuating people from remote townships from East Gippsland.
Another three Chinooks were expected to depart from Townsville to join the fleet in Sale.
ADF engineering equipment is arriving via air and sea, as ADF engineering personnel join state resources to clear and reopen roads – moving debris, assessing affected trees for risk of falling and completing damage assessments.
The National Bushfire Recovery Agency has been established by the federal government to work with the state governments to coordinate support, such as recovery tasks, income and mental health support.
Stratford Football Netball Club opened its clubrooms for residents of East Gippsland evacuating their homes.
More than 400 pallets of food and clothing were donated locally to relief and incident centres, while a number of bushfire appeals have been set-up.
Wellington Shire Council thanked those who donated for the overwhelming response, but asked people to cease giving after it received truck loads of donations from locals and across Victoria.
“We have run out of space for all these donations and we cannot process them all,” a Wellington Shire spokesperson said.
The spokesperson encouraged people to stay away from emergency relief centres at Sale Baptist Church, Gippsland Regional Sports Complex and Sale Showgrounds, as trained staff and volunteers were “incredibly busy” helping evacuees.

Similarly, Wildlife Victoria released a statement saying it now had “enough koala mittens for about the next 10 years” and said it could no longer accept goods, food or handcrafted items for wildlife at this time.
The rescue organisation also asked people to stop phoning the wildlife emergency response number with offers to help, as it prevented people with genuine wildlife emergencies from getting through, and encouraged people to donate to its bushfire appeal instead, to be distributed to fire-affected wildlife shelters.