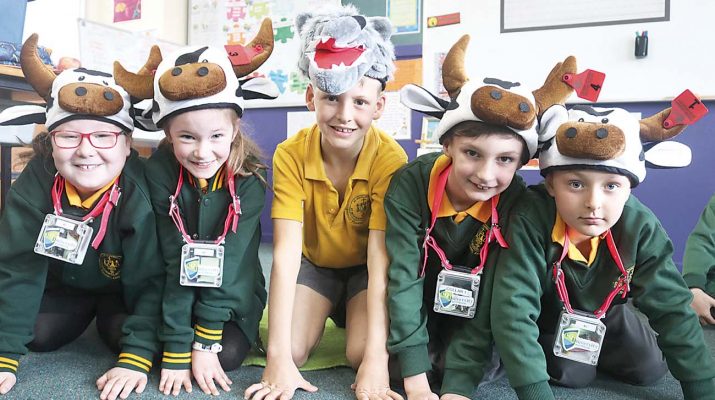 St MARY’S Primary School, Newborough students have learnt a career in agriculture doesn’t necessarily mean getting dirt under the fingernails.

Students recently took part in hands-on sessions about emerging technology in agriculture as part of a GippyAG program, run by Food & Fibre Gippsland.

Years three and four kids learnt how FitBit-like monitors could be put on cattle and sheep to collect live data on herd behaviour, as well as how sensors could detect ripeness in fruit.

The program is being rolled-out across Gippsland primary and secondary schools by CQ University to teach kids about technology careers in food and fibre.

“There are four jobs available for every graduate in agriculture. We want kids to realise that technology is being used in lots of different industries, including agriculture,” Ms Cosby said.

“We know young people choose their career early on and we hope by doing this they will consider a career in food and fibre.”

Kids learnt how accelerometers were being developed for sheep and cattle to improve animal welfare, worn on the animals like a FitBit.  The devices stream data to the farmer’s iPad to detect disease, when livestock are giving birth, to show if the herd is stressed or being attacked by predators.

In another activity, students used science to test the sugar levels in fruit to determine if it was ready to pick without having to rely on appearance or smell.

St Marys teacher Jasmin Prestidge said learning about paddock to plate was an important part of the school curriculum.

“The kids are so engaged and excited to wear FitBits for cows and learn about fruit,” Ms Prestidge said.

“It’s great to have an external body come and talk about food and fibre production.”