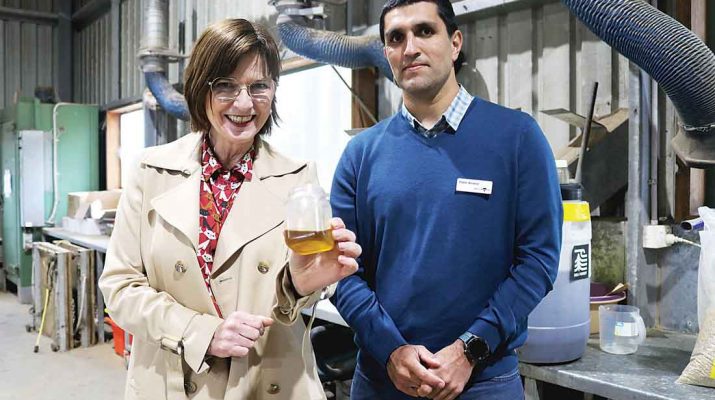 By Michelle Slater
Ellinbank dairy cows are taking part in a trial to chow down on a special species of seaweed in an attempt to reduce their greenhouse gases.

“Here we want to understand the potential to reduce methane emissions and also the impact on milk production,” Prof Jacobs told Gippsland Farmer.

“We still want the animals to produce milk cost effectively to make this a viable option for dairy farmers.”

The dairy cows at the West Gippsland-based farm were being given the special additive in their twice daily feeds in a controlled setting that mimicked their grazing patterns.

The milkers were decked out in a special non-invasive harness and halter with tube over the animal’s nose that led to a canister to capture the animal’s belches.

Professor Jacobs said methane was responsible for producing 60 per cent of the smart farm’s greenhouse gases, and the seaweed could help it achieve emissions neutrality by 2026.

“Thus study has applicability to any ruminant, if it works in dairy cows, there’s no reason why it can’t work in beef cattle, sheep or goats,” Prof Jacobs said.

“Our role is to test this for the dairy industry, and then potentially other grazing industries.

“At our other smart farm in Hamilton, we have a paddock-based feeder that allows the animal to eat certain amounts whilst grazing.”

The red seaweed was being grown by FutureFeed under the auspice of the CSIRO, but Prof Jacobs said he hoped there could be more local commercial opportunities for the product.

“I’d love it, if down the track this becomes a viable option for livestock, we have a fantastic coastline in Gippsland, that maybe there would be an opportunity to have seaweed farms in Victoria.”

“Farmers are in the frontline when it comes to experiencing the real impacts of climate change, but they also know they are key emitters of greenhouse gases,” Ms Thomas said.

“The experiments being designed and the solutions being proposed have real applications and can maintain the productivity of every cow.”