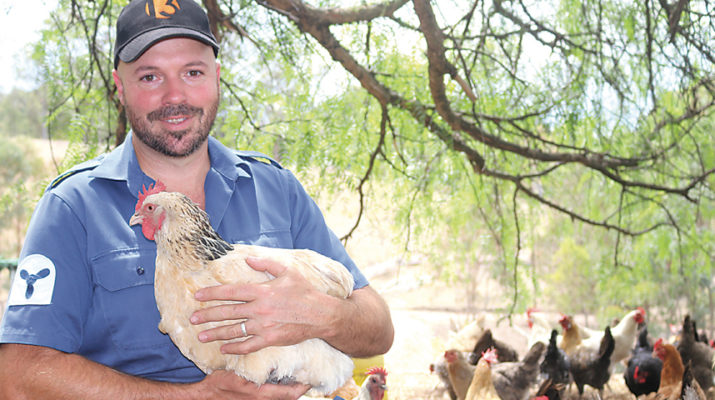 A Bruthen permaculture farmer is transforming his property into an Arcadian paradise for chooks to live as nature intended while filling a niche demand for multi-coloured eggs laid by rare breeds.

Mick Donelly said some people did a double-take when they saw his eggs ranging from pale blue through to dark tan for sale at local farmers markets.

“They see the coloured eggs for the first time and their eyes light up,” Mr Donelly said.

He believes he may be the first farmer in Australia to start commercially supplying multi-coloured eggs laid by heritage chooks which are allowed to roam in a natural environment.

Domestic hens originated from the rainforests of south-east Asia and Mr Donelly wants his chooks to forage and shelter as he has seen them do around the Balinese jungles.

Mr Donelly said his methods have piqued the interest of Asian people living in Australia wanting to source eggs and poultry meat raised in similar environments as across the Timor Sea.

He said he was also supplying the Victoria Market where there was a consumer demand for unusually-coloured eggs that were also ethically-produced.

The fifth-generation Bruthen man is evolving his nine-hectare property from what was an over-grazed horse paddock into an integrated permaculture system.

He argues that keeping hens in free range pastured conditions fed on grass and pellets is unnatural.

Mr Donelly said allowing his chooks to feed naturally would keep down his input costs and allow him to sell his eggs at a lower price point.

He cottoned on to the idea after coming across American-based permaculturalist Paul Wheaton who had written extensively on the topic.

Mr Donelly is in the process of providing a variety of trees, shrubs and fodder species to give his chooks a natural diet which includes fallen fruit, grubs and insects.

He has 250 chickens including 15 different heritage breeds, roaming in mobile paddocks that he rotates across his property, with access to a caravan for shelter and protected by a Maremma dog.

He plans to breed up to 800 chooks and is investigating on-farm meat processing for his naturally-raised roosters which are slaughtered at maturity.

Mr Donelly said his chooks were playing a small part overall on his property which he wants to develop into a showcase for permaculture demonstrations in east Gippsland.

“Chooks are a great first step because of the fertility they bring to the soil but they will be a small part of the property,” he said.

“My primary aim is to show people a permaculture site can turn a profit on a broad acre. People think permaculture is just for backyards.”