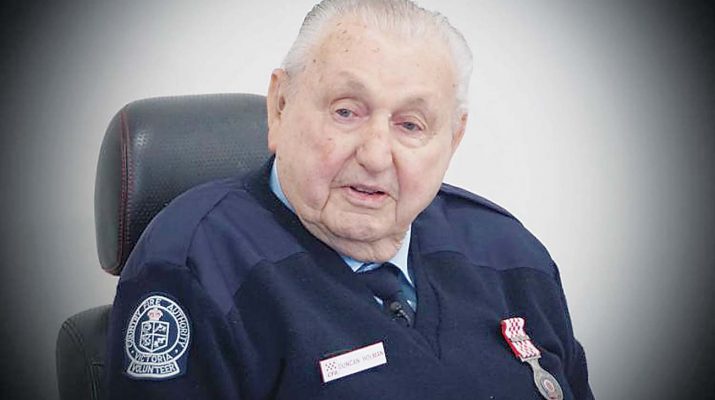 CFA officially recognised Duncan Holman’s 80 years of service on Wednesday, May 8 among family, friends and his brigade.

Mr Holman joined his local brigade in Drouin in 1938 when he was 14 years old, seven years before the CFA was formed.

Mr Holman reflected on the night he joined – he was told he was “big enough” and he was signed up straight away.

Mr Holman describes his early years in the brigade as thrilling and exciting.

“I had a lot of mates in the brigade, we all trained together and we all got along,” he said.

From the early days of attending fires with a horse and cart and hand-pumping water out of the ground, Mr Holman said the brigade was happy to receive its first truck.

“The truck held about two gallons of water which lasted about two minutes,” he said.  However, little water was better than none.  “A lot of the time we had no water, because we had no pump, so we had to fight fires with beaters,” he said.

Within Mr Holman’s first year with the brigade, he had to face the devastating Black Friday fires in 1939.  The fire killed 71 people, destroyed around 1000 homes and burnt more than two million hectares of forest. “We saw a lot of devastation that day, a lot of lives lost,” he said.

A few years later Mr Holman lied about his age so he could serve in World War II, touring New Guinea as an engineer. He returned to Australia and settled in Longwarry where he soon became captain of the Longwarry Fire Brigade. He held this title for more than 35 years.

During this time he married Betty. She was the communications officer at Longwarry Fire Brigade for 30 years. “I was lucky to have Betty because I could get away to fires without getting in trouble,” Mr Holman said. Mr Holman was promoted to deputy group officer after the Gippsland fires in the 1970s.

Following those fires he earned the Queen’s medal. Along with many other medals, in 1991 CFA honoured Mr Holman with a life membership.

His son Peter Holman is carrying on his father’s legacy as a volunteer firefighter with CFA’s Warragul Fire Brigade. Peter said he was very proud of his father, describing him as “inspiring”.  “He was a very good leader, he inspired the troops and he led by example,” he said.

Mr Holman is the first person to receive an 80-year service medal and he was genuinely humbled by the award.

“I enjoyed every minute of my life when I was in the fire brigade.”