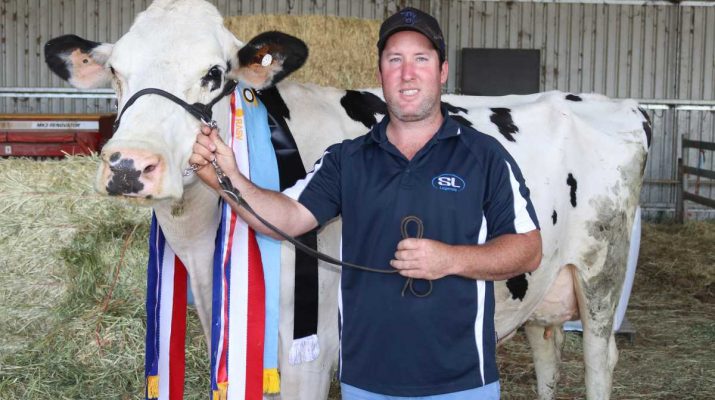 A BUNDALAGUAH Holstein breeder is about to take on the best in the business at Dairy Week this month with a blue-ribbon cow who has scooped the pool in the show ring.

Glomar McCutchen Annecy won a swag of accolades this year including grand champion Holstein and best udder at the Melbourne Royal, as well as overall cow of the show at the East Gippsland feature Holstein show.

She also beat about 1000 cows from Victoria and South Australia in the Semex on-farm challenge, winning the overall supreme Jim Conroy award.

Glomar Holsteins’ Justin Johnson said the young cow on her third lactation was “exceptional” out of their herd of 500 milkers.

“She is a standout, she has the right constitution for a cow and she has a youthful udder, good legs and feet and the height, width and capacity to match it in the show ring,” Mr Johnson said.

“But it’s only one judge’s opinion on the day, so you never know how you will go. We get the satisfaction of breeding the type of cows other people can enjoy.”

The champion cow is out of Glomar Shamrock Annecy, who comes from line known for its longevity, by imported semen from the USA bull De-Su BKM McCutchen.

She is being prepared for Dairy Week in Tatura, the biggest industry showcase in Australia where Mr Johnson said she would be up against “the best of the best”.

The third generation dairy farmer is helping to run the 400 hectare property with his father Peter, who recently accepted a master breeders’ award for the years 1981 to 2000.

The farm has been showing cattle for 40 years, also producing bulls for AI and exporting heifers and semen to China.

“We are not show breeders, we breed for type and index, our bulls produce daughters people enjoy milking,” Mr Johnson said.

The young farmer had also taken a group of next generation dairy farmers to a European young breeders school in Belgium earlier this year as part of an initiative he started-up to foster future Aussie farmers.

“It is about showing people that farming is worldwide, not just about what happens here. It also opens up their eyes to new farming practices and encourages leadership in the community,” he said.