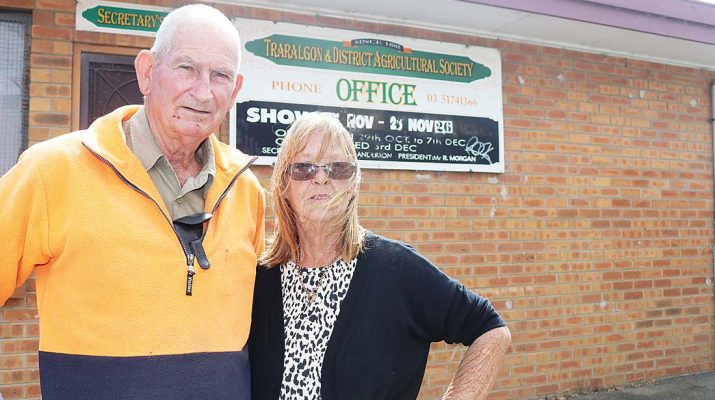 By Michelle Slater
The Traralgon and District Agricultural Society remains in limbo as it waits to find a new home after the Traralgon Recreation Reserve and showground was destroyed in last year’s floods.

The showground was inundated under more than a metre of water in June when Traralgon Creek bust its banks in the severe storms that wreaked havoc across Gippsland.

Flooding caused hundreds of thousands of dollars in damage to rec reserve user groups, including the ag society, as well as the local footy, netball, cricket and roller derby clubs.

“We lost everything, we were heartbroken, we spent all this money on the grounds to get it up to standard, if it wasn’t for the flood, we could have had a show this year,” Ms Anderson said.

“Now we have nowhere to hold a show, we have no time to get everything rebuilt in time to hold one this year and if we do hold another show, we will have to start from scratch.”

It comes as the Traralgon show society had been unable to hold its annual December show for the past five years after copping a series of setbacks.

The show was canned in 2017 due to heavy rain, then put on hold after a wayward car damaged the pavilion, and then COVID hit putting all public events on ice.

The ag society had just spent more than a $150,000 in state and federal funding to revamp the art and craft pavilion to put on a rejuvenated show before the flood hit.

“My favourite is the kids’ art from the special schools, they get a card and they are over the moon. It brings tears to my ears to see the joy on their little faces, they are so grateful,” Ms Anderson said.

“But now we are in limbo, everything is on hold until we know what we will do. We have no idea when the next Traralgon show will be.”

Latrobe City Council has put forward a $10 million master plan to build a flood-proof multi-use pavilion at the rec reserve and a new community hub and events space at Glenview Park.

The Traralgon ag society is now working with Latrobe City on tweaking the plan, which could mean the annual show would be moved to Glenview Park.

But Ms Anderson said she hoped the show could stay at the rec reserve where it was walking distance from town, and the pavilion could somehow be saved and hoisted above flood height.

Latrobe City has pledged $2 million towards the project and will seek state and federal funding to reach the $10 million mark.

Latrobe City Mayor Kellie O’Callaghan said the extent of the flood damage was more extreme than anticipated, with a number of buildings beyond repair.

“Council believes there is an opportunity to create new, purpose-built spaces to better accommodate all user groups and prevent future damage in the event of flooding,” Cr O’Callaghan said.