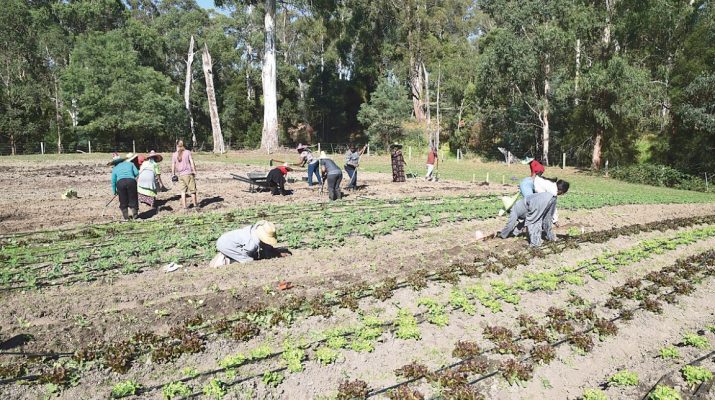 African music sounds across the paddock where volunteers switch from hoeing and raking to drumming and dancing and back again.

The United African Farm project at Longwarry is re-connecting African migrants to their agricultural roots.

The first working bee to break ground and plant seedlings was held in late March and by the time of the second working bee in mid-April, lettuce and kale were flourishing on the donated 0.4 hectare site near Longwarry’s Picnic Point.

Participants Tuch Ajak and Queyea Tuazama met at a farming incubator project run by the Cardinia Food Movement and combined their energies to help get the community project off the ground.

Tuch said farming was important to the African-Australian community.

“A day in the field connects us to home,” he said.

“When people come here (to Australia), they don’t have access to the land. It gives them a sense of belonging.”

According to Tuch, the initial crops would see the community through the winter months before they planted traditional African crops like okra for the summer.

He said it was important for the participants to grow their own produce so they could monitor what they eat.

The project is also helping community elders feel at home and share their knowledge and skills with young people.

Tuch said the project was open to anyone in the African community and already had participants from Sudan, South Sudan, Liberia and Uganda.

“We come to work hard, to grow larger than one acre. We are spreading the word through the church and our pastor.”

The group already has plans for an African market day in Pakenham where they can dance and sell their produce. They also dream of a time when they can supply major Australian stores with traditional African produce.

“We really appreciate her. God will bless her. She has really helped bring the whole African community together,” he said.

Vicki said she knew what it was like to be on the outside and she wanted to focus on positive examples rather than negatives.